Should The Islamic World Apologize For Slavery? - Part One 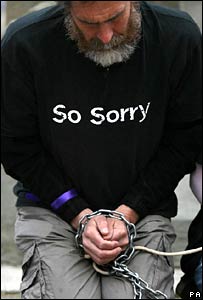 For members of Britain's politically correct establishment, this week has been one of hand wringing and embarrassing gestures of self-abasement. On Saturday, March 24, a procession took place through London, led by the two most senior figures in the Anglican Church, the Archbishop of Canterbury Rowan Williams, and Archbishop of York, John Sentamu. The event, called the "Walk of Witness" was part of the bicentennial commemoration of Britain's abolishment of slavery. Among the procession was a group that had marched 250 miles from Hull in shackles and chains (pictured). They were released from their manacles by the Archbishop of the West Indies.

On Tuesday March 27, the Queen and Tony Blair took part in a commemorative service at Westminster Abbey. It was exactly 200 years previously that WIlliam Wilberforce, (born in Hull on August 24, 1759) had succeeded in passing an act to abolish the trade in slaves, which did not come into force until January 1, 1808. This act did not see the end of slavery in Britain and its colonies. It was not until August 29, 1833 that the Slavery Abolition Act was passed. Wilberforce had died a month before, on July 29. He had retired from politics in 1825. Wilberforce is celebrated in Michael Apted's new movie "Amazing Grace".

Tuesday's ceremony at Westminster Abbey was interrupted by a man in an African batik shirt, Toyin Agbetu, who shouted his objections to the service. As Archbishop John Sentamu, an African, wryly noted: "I hope the depth of anger he expressed is matched by that he should have towards those African chiefs who grew fat through the capture and sale of their kith and kin for trinkets."

No-one is asking for the descendants of the Oba of Ife or the King of Dahomey to make apologies for their part in slavery. An estimated 10 to 25 million Africans were sent across the Atlantic, shackled together in appalling conditions, destined to lead terrible and squalid lives as slaves. From London alone, 2,704 ships left to pick up slaves and transport them to the New World.

America's slavery officially ended in 1865, even though it led to Civil War. Eight years earlier, the US Supreme Court ruled in the case of Dred Scott that black people could never become citizens of the United States. In February 2007, Virginia officially apologized for its part in slavery, and on Monday this week, Maryland followed suit.

Modern Western nations' involvement in the black slave trade lasted little more than 350 years, yet Islam has been involved in the black slave trade for more than 14 centuries, from the time of its founder. Mohammed owned black slaves, and in countries like the Islamic Republic of Mauritania, the black slave trade continues. According to Murray Gordon, the amount of black slaves taken by Muslims amounted to 11 million, though this figure is probably an underestimate. While white (and Arab) slave merchants bought and sold black people from the west coast of Africa, Muslim slavers in north Africa also engaged in a trade of white Christians, a trade that politically correct history books conveniently ignore.

There is a line in the Marine Corps Hymn that goes "From the halls of Montezuma to the shores of Tripoli". The last part of this line refers directly to naval engagements from 1804 and 1815, which sought to end the trade in white slaves. Though most of the Christian slaves in North Africa were Europeans, a sizable number were Americans, captured at sea by the notorious Barbary pirates, or corsairs.

For the Barbary corsairs, named after the Barbary ("Berber") coast, trade in white slaves began in earnest in the late 16th century. They came from Tripoli, Tunis, Algiers and Morocco, all vassal states under the Ottoman Empire, which is why most contemporary accounts refer to the corsairs as "Turks" or "Janissaries" (a type of soldier in the Ottoman empire).

The corsairs first came to prominence in the early 16th century, led by the brothers Barbarossa, who had assumed powers as the first pashas of Algiers. Uruj was beheaded by the Spanish in 1518, but his brother Khair ad-Din (died 1546) succeeded him. Khair ad-Din took control of Nice in southern France in 1543. The Barbarossa brothers led raids on shipping throughout the Mediterranean. Their successors would lead raids far beyond the confines of the Mediterranean coastlines.

One of the most famous individuals captured by the Barbary corsairs was Miguel de Cervantes Saavedra, the author of Don Quixote. In 1575, the ship he was on, the Sol, was captured by corsairs. For five years he was a captive in Algiers, and on numerous occasions he had tried to escape. Cervantes escaped severe punishment as he bore a letter of recommendation from Don John of Austria, illegitimate brother of the King of Spain. A ransom was made for him, his captors assuming he was of the nobility. This was paid and he was released in 1580.

The southwest of England had been subjected to the predations of Barbary corsairs from the end of the 16th century. In 1617, a fishing fleet from Poole in Dorset had set off for Newfoundland. There, they were besieged by pirates described by survivors as "Turkish", and the majority of the crews were abducted. By 1619, more than 300 ships had been captured off the south coast of Britain. The majority of sailors who had been captured by Barbary pirates were never heard from again.

On March 24, 1620, Owen Phippen (also called Owen Fitzpen was captured by corsairs and held as a slave for seven years until his escape. A memorial stands in St Mary's Church in Truro, Cornwall, erected by the rector, Owen's brother.

By the time Owen Phippen was captured, the population of white slaves in Algiers alone numbered more than 20,000, according to Paul Baepler of the University of Minnesota. A decade later, the figure had risen to 30,000 men and 2,000 women. Sailors were not the only victims of the Barbary slave raiders.

In July 1625, a raiding party of corsairs landed at Mount's Bay in Cornwall, and swept into the parish church where the locals were worshipping. Sixty men, women and children were abducted and carried onto the corsairs' boats. Looe, a small Cornish port, was also attacked, though its inhabitants had tried to hide or flee. 80 men were taken and the village was burned. The mayor of Plymouth reported that "27 ships and 200 persons (were) taken". A second fleet of corsairs arrived soon after the first. The mayor of Plymouth would later record that 1,000 vessels had been destroyed in that summer's raids, and the same number of villagers had been abducted into slavery.

On a moonlit June night in 1631, the inhabitants of the coastal village of Baltimore in County Cork, southwestern Ireland, were asleep, unaware that by daybreak their lives would be changed forever. A small flotilla of boats had sailed into the bay unnoticed. These boats, called xebec by their crews, had sailed from Sale in Morocco. They bore 230 musketeers, Muslims to a man, and they had come looking for slaves to sell in Algiers. They had no mercy for any of the town's inhabitants as they burst into homes, setting the crofts alight. When one villager, Thomas Curlew tried to resist, he was hacked to death, and his wife was carried off. All of the elderly villagers were murdered, and by morning, the Barbary corsairs sailed off, carrying with them 130 men, women and children.

The leader of the abductors at Baltimore was himself a former slave. He went under the name of Murad Reis, but originally he came from Harlem in the Netherlands, where he had been known as Jan Jansen or Jan Jansz. After being captured at Lanzarotte in 1618 he became a convert to Islam, and married a Moroccan woman, even though he had left a wife and daughter behind in Harlem. His raids took him far from the Barbary coast. He even raided Iceland in 1627, taking 400 captives into slavery. He became governor of Oualidia in 1640. Many of those who became slaves opted to convert to Islam, though this was no guarantee of freedom from servitude.

According to Robert C. Davis of Ohio State University, author of Christian Slaves, Muslim Masters (2004), in 1544 7,000 captives were seized by Algerian corsairs in the Bay of Naples. In 1554, Vieste in Calabria, Italy, was raided and 6,000 people were carried off. In Granada, Spain, 4,000 men, women and children were taken into slavery in 1566.

The traffic in Christian slaves had actually decreased in the 17th century, partly because inhabitants of Mediterranean coastal regions had fled, and partly because the Turkish Ottomans, made cautious after the Battle of Lepanto, were no longer providing support to the corsairs. The Battle of Lepanto took place in 1571 (Cervantes suffered a hand injury in this naval battle) between Ottomans and allied Christian forces. The Ottoman fleet was crushed in this engagement.

In 1645 in what is now Morocco, one man was born into the Alawite dynasty whose sheer brutality and megalomania would demand more and more slaves to achieve his grandiose plans. This man (pictured) was Moulay Ismail Ibn Sharif, a direct ancestor of the current King Mohammed VI of Morocco. In 1672, Moulay Ismail had succeeded as ruler after his brother Moulay al-Rashid had fallen from his horse and dashed his brains out. At the time he ascended the throne, 26-year old Moulay Ismail was the governor of Meknes in the north of the country. He decided to remain in Meknes, and to embark on a massive building project, to create the largest and most opulent citadel ever seen. And to fulfill these ambitions, Moulay Ismail needed manpower. His lack of care for his slaves' well-being led to a need for their continual replenishment, and thus he sponsored his own corsairs in their piracy and kidnapping.

Should The Islamic World Apologize For Slavery?

Adrian Morgan is a British based writer and artist who has written for Western Resistance since its inception. He also writes for Family Security Matters, Spero News and Faithfreedom.org. He has previously contributed to various publications, including the Guardian and New Scientist and is a former Fellow of the Royal Anthropological Society.