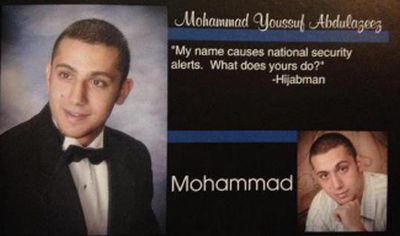 Over and over, this commentator tried his classmate state that Mohammad had suffered racial discrimination from white Americans because he was a Muslim. What was it like for poor Mohammad to be raised in the deep South queried the commentator – of course trying to tie Mohammad to the Southern flag killings of 9 blacks in South Carolina. To his despair, the classmate stated that the notation on his yearbook photo was a joking commentary.

The media will continue its hunt for clues to how such a wonderful young man became radicalized, supposedly on his own, and committed a mass murder like this. After a few days, as the outcry about this horrendous incident die down, the hunt for the clues will come to an undeclared end with no credible clues found.

How could we find the clue, when we are determined to exclude one obvious source of it. The fact is: Mohammad Youssef Abdulazeez was a devout Muslim, or he became so lately – a true, morally right good Muslim, following the writs and dictates of Islam to the letter. In committing the murderous Jihad rampage in Chattanooga, he was simply obeying the Jihad teachings of the Quran and the Sunna of Muhammad to instill fear and terror into the heart of the Kafir. For example, a Hadith, collected by Bukhari (4.52.220), goes to say:

Allah's Apostle said, "I have been sent with the shortest expressions bearing the widest meanings, and I have been made victorious with terror (cast in the hearts of the enemy), and while I was sleeping, the keys of the treasures of the world were brought to me and put in my hand." Abu Huraira added: Allah's Apostle has left the world and now you, people, are bringing out those treasures (i.e. the Prophet did not benefit by them).

And of course, the Islamic God fully agrees with His prophet in verses of the Quran:

On the Muslim side, mosques as usual came out all shocked by young good Muslim Mohammad Youssef Abdulazeez's Jihadi rampage on the final day of Islam's holiest month – the Ramadan – which was Prophet Muhammad's favorite month for launching Jihad expeditions in his life time. Mosque leader Dr. Sheikh said:

‘The bellicose interpretations of jihad... were not preached at the mosque, and he said that parents were sensitive to the way that the Islamic State and other radical groups had used the Internet to entice and recruit young American and European Muslims to violent causes. “We certainly do not want to be part of that demented ideology,” he said. “That is not the message we preach here. What people do on the Internet or the World Wide Web or in their own homes, we can’t control that.”

Dr Sheikh may be saying the truth in asserting that his mosque does not preach violent interpretations of Jihad – for honest or deceptive (Taqiya) intent. But the doctrine of Jihad in the Quran, and its manifestations in the actions of prophet Muhammad, are outrageously violent and barbaric.

What Dr. Sheikh as well as our political and media elites must ponder upon is: When a person truly profess to Islam, he/she ideally must embrace and act upon numerous teachings of the Quran and Hadith like these:

Despite whatever the Imams in mosques or even parents may teach, when a Muslim goes into the Quran, the Muslim holy book, and the Sunnah, the life-stories of Prophet Muhammad, the only perfect human person ever in Islam – and stumbles upon divine teachings and commands of the Quranic verses as mentioned above and decide to act upon those teachings, that Muslim can't but act violently in the likeness of what Mohammad Youssef Abdulazeez committed in Chattanooga, Tennessee, as much as many Muslims have been committing all over the world in recent days and years – Syria, Iraq, Nigeria, Pakistan, Afghanistan and where not.