In sum, the people illegally streaming into Europe in unmanageable numbers are certainly not desperate refugees. Instead, they are the well-oiled section of the masses in their native countries, seeking an even better life and money, especially the social benefits, that Europe and other Western countries offer. The really poor and desperate section of the masses, who deserve to be called real refugees, will never get an chance to put their feet on the illegal smuggling boats, just because they cannot afford to pay the illegal smugglers large sums of money.

What's ahead for Europe?

European and other Western countries have been absorbing large numbers of asylum seekers and illegal intruders from the Muslim world all the time. Recent announcement by Germany and Austria to accept huge numbers of arriving illegal intruders has opened the floodgate. It should be understood that if given free passage into Europe today, the majority of the populations from Islamic countries would reach the shores of Europe tomorrow. When the German government has recently indicated that their country can absorb a massive 500,000 asylum-seekers and illegal intruders annually over the next 5 years, it will encourage a deluge of migrants from Islamic countries heading toward Europe over the coming years and decades. Germany should prepare itself to accept a much larger number than 500,000 per year and much beyond the next five-year period.

What does this inevitable prospect holds up for Europe and its citizens? We may recall that Muslims have tried to take over Europe from the very beginning of Islam with incursions into Mediterranean Islands as early as the 650s. Since then, Islam's Jihad army have attacked Europe almost nonstop and as deep into Europe as possible, reaching the gates of Vienna twice, the last time in 1683 AD. And during those centuries of Jihadi invasions, Muslim rulers had established firm hold over the Mediterranean regions and Eastern Europe, while also establishing temporary Islamic rule over parts of Italy, France, and Germany. Isn't the Islamic occupation and rule in Spain that lasted nearly 8 centuries is a matter of great pride for Muslims around the world?

Despite Europe being Islam's battlefield par excellence in the Middle Ages, valiant Europeans were able to drive out the Islamic invaders from the West Europe, although large numbers of Muslims stayed behind in the heavily Islamized Eastern Europe.

With these historical facts in perspective, the recent surge of Muslim migrants into Europe, which may bring in tens of millions of Muslims over the next decades, may help make up for what the 11 centuries of Islamic invasions into Europe failed to achieve in the past. Stretching from Stockholm, Sweden, in the North to Madrid, Spain, in the South – an Islamic curtain is descending upon Europe, the world’s great civilization that gave mankind the concept of democracy and the Enlightenment. Europe is faced with the ominous prospect of losing all those achievements, which are already being systemically destroyed by its already existing small Muslim populations. This sudden surge of Muslim migrants may have struck a disastrous blow to Europe, to its freedom and democracy, its equality of mankind, equality of women with men, its concepts of human rights.

German Chancellor Angela Merkel said, the region’s refugee crisis is unworthy of European values and will require a bigger effort to aid those seeking safe haven.

While Chancellor Merkel is right from the truly humanitarian point of view, but the majority of the Muslims detest and would seek to destroy many a European values she is talking about – its liberty, equality of humans, equality of women with men, freedom of speech, and so on. What is extremely worrying is the fact that Islamic State is using this opportunity to send in its supporters into Europe, which it wants to turn into its next battlefield.

Angela Merkel has said, the "breathtaking" flow of migrants into Germany will "occupy and change" the country in the coming years. She is absolutely correct.

If these people were truly fleeing the tyranny of Sharia Law and Islam to live in the freedom and democracy of Germany, then all will be fine. But this is not what is happening. Experiences have shown that Muslim immigrants everywhere in Europe and other Western countries are trying to establish the rule of Sharia Law and the supremacy of Islam. So, what is happening today may well turn out to be Hijrah or Jihad by emigration – a paradigm that Prophet Muhammad himself had instituted in Islam when he migrated to Medina.

Cultural Enrichment in Germany – Raping the Kuffar women: The arriving Muslims are trafficking many young Muslim women into forced prostitution, while sexually attacking German girls and raping them. Police and government officials are hiding this rape jihad. Following links can give a glimpse of a whole host of social problems the migrants are creating in Germany:

In Italy, migrants gang raped a 45 year-old female manager of an asylum center and the center demolished. See how African migrants attacking a car in Italy:

What do Muslims do with all the donated clothing. They dump it like garbage 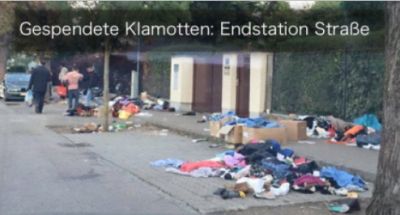 Will Hitler be proven correct about Islam and Germanness?

Hitler stated in August 1942: “Had Charles Martel not been victorious, then we should in all probability have been converted to Mohammedanism, that cult which glorifies the heroism and which opens up the seventh Heaven to the bold warrior alone. Then the Germanic races would have conquered the world.” Hitler told Albert Speer that Islam is “perfectly suited to the Germanic temperament.” If the Muslims had won in Tours, the whole of Europe would have become Muslim in the 8th century and “the conquering Arabs, because of their racial inferiority, would in the long run have been unable to contend with the harsher climate and conditions of [Europe]. They could not have kept down the more vigorous natives, so that ultimately not Arabs but Islamized Germans could have stood at the head of this Mohammedan Empire.”

The recent surge of Muslim migrants into Germany in massive numbers may have Hitler get his wish – but only in the sense that Germany becomes a Mohammedan country. But that will also come with a heavy price for the Germans, a most liberal people in Europe today. Let us be reminded of what the Quran and Sunnah teach Muslims:

The possessions of the Kuffar is the spoils for Muslims, which Allah has given to Muslims as sacred booty. Germans are already experiencing it with them being dispossessed of their properties, and German churches being looted by ISIS supporters to fund the caliphate.

Let us be reminded that there is no equality of humans in Islam. The Quranic commands and prophetic traditions dictate that non-Muslims must live at the mercy of Muslims. So, all those good-hearted Germans cheering the Muslim arrival in the train stations and handing out food and clothing are regarded by Muslims as:

Therefore, to the arriving Muslims, the non-Muslim Germans are not equal and dignified human beings but are “worst beast”, are like dumb “cattle” and can't be considered as friends.

The fate of Europe.

Czech ex-president Vaclav Klaus is one of the very few politicians speaking out. He said: "If Europe wants to commit suicide by taking up an unlimited number of refugees, it is to do that – but without our consent."

There are 20 million Muslims ready to invade Europe.