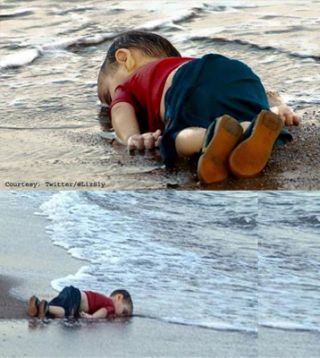 An even more serious issue has to do with how many of the current wave of emigrants leaving the Middle East and North Africa are truly displaced victims or merely opportunists seeking a better life. The drowning of 3-year-old Aylan Kurdi has become “the symbol of the refugees’ tragic situation.” But was he a victim of Western indifference or parental irresponsibility?

But there is much more to the story than the sympathetic press in the West is willing to reveal: The boy’s father, Abdullah Kurdi, had applied for refugee status in Canada, but his application was rejected as incomplete because he had previously worked in Turkey and needed an exit visa from that country.

So in August, Abdullah joined the mass emigration movement with his wife and two young sons, none of whom could swim. Although they had purchased life-jackets, they weren’t wearing them when a wave swept the wife and two boys overboard. Apparently, Abdullah’s primary goal in Turkey was to get some dentures under the Turkish social welfare program, for which he qualified.

Incredible is the fact that Abdullah wasn’t even in the boat carrying his wife and children.

After the tragic accident, Abdullah and three adult-sized, ornate caskets found their way back to his home town of Kobans, Syria.

Since Muslims bury their dead wrapped in a cloth and laying on their sides, these coffins seem rather out-of-place. If Abdullah and his family were truly displaced, how could they return to their home town for the funeral? If Abdullah and his family were so desperate he had to emigrate in a rubber dinghy, who paid for the coffins, their transport, and airfare for Abdullah’s return to Kobans? 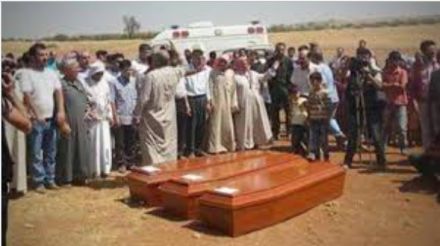 Abdullah was quoted in the media as saying he now wants to stay in Kobans because Syria is already much better than Europe. Common sense would say that this “symbol of the refugees’ tragic situation” is actually a story of an opportunist who irresponsibly put his family in peril while he is getting some new teeth at the expense of the Turkish social welfare system.

A whole different kind of emigration

We are dealing with a whole different kind of emigration. It’s clear that world leaders do not know how to deal with the problem. After WW II, there were a lot of “displaced people” needing a new home. These people were basically aliens in their home countries, “displaced” by the outcome of the war. Jews and Poles come to mind. What we have today are people leaving “failed states” in large numbers. The flow of humanity could potentially be the entire population of those failed states – all for the same reason. But these people are not ideological or cultural misfits. Instead, they are bringing their failed ideology and culture with them. In their new homeland, they want to set up parallel legal systems that are alien to the existing constitutions and legal systems. What will this do to the culture and legal systems of their host countries?

This year, Germany is slated to take in 800,000 migrants from the Muslim world, who are better-off and criminally inclined as they paid thousands of dollars to illegal people smugglers for reaching Europe. Is there any moral argument that Germany should accept those 800,000 illegal intruders? Compassion compels us to help those in need, but when there are so many claiming to be in need of assistance, somehow that compassion must be rationed. In the humanitarian triage, who decides which emigrants will become immigrants to a new country? Is it fair to fast-track relatively rich people from warn-torn countries who arrive at our doors through illegals means, while others from the same region—who are more impoverished, helpless and at greater risk—had to wait 10 years for legal entry?

Meanwhile sinister emigrant settlement process is happening here in the U.S. Large numbers of Somalis have been re-settled in small agricultural communities. These are towns that used to employ large numbers of unskilled laborers from Mexican emigrants in meat packing and food processing industries. In effect, the government is saying to employers that we are going to clamp down on your use of illegal Mexican immigrant labor, but we will replace those workers with Somalis who will likewise work at low wages. To sweeten the deal, the government subsidizes the companies who will employ these workers. What we are discovering, however, is that human labor isn’t interchangeable. Mexicans not only have a strong work ethic but they share the American-style liberal values. The Somali workers, on the other hand, do not have the same work-ethics or mostly stand opposed to their employers' ethical values. This is creating problems.

While it may appear ethically right to embrace with open arms all the emigrants throwing themselves at our door-steps through illegal means, the massive emigration phenomenon may also turn disastrous for Western countries. This would encourage more and more people to try to enter Western countries illegally. As more and more Muslim nations turn increasingly violent, a majority of the world's 1.5 billion Muslims can be at the door-steps of the western nations in the coming years. And its impact, from draining the resources of the host countries to causing socio-cultural problem due to their illiberal and reactionary attitudes, may put the stable socio-economic system of western countries at peril. Western nations must ladle out their compassion toward the newly arriving emigrants judiciously – lest Europe's own masses, years down, are faced with the same situation that emigrants today are fleeing from in their home countries.