Dear Muslim, Stop Running Away from the Quran

Muslims are becoming more and more annoyed when non-Muslims criticize their sacred book, the Quran, or their moral code, called Sharia Law.  However, their campaign to demonize any criticism of Islam as bigotry or “Islamophobia” just isn’t working. Cudgeling socially unacceptable religious beliefs is a long-standing American tradition dating back to the witch trials of Puritans (1692), the doomsday cult of Johannes Kelpius (1708), the polygamy of the Mormons (1849), and the exhumation of corpses by the Branch Davidians (1987). Islam has more socially unacceptable beliefs than any of those other religions.

When confronted with shameful beliefs drawn from the pages of the Quran, Muslims usually run away from their sacred book.  No, they don’t physically run away, but they use any number of ploys to avoid directly discussing the ideological problems.

You’ve probably heard them all:

While these responses seem to give the Muslim the upper hand in the discussion, the reality is that he or she has merely shut down discussion of Islam by running away from the Quran. None of the above is a valid excuse for not discussing a particular verse of the Quran.

“Trump’s proposal for a ‘commission’ that would identify for Americans the tenets of ‘radical Islam’ crosses the line into government interference in religious beliefs. Will a Trump administration entangle itself in interpretation of [Islamic] religious principles?. . . This government promotion of a state version of a particular religion would violate the First Amendment and put America on a path to a society in which those in power get to choose which beliefs are ‘correct’ and which are ‘incorrect.’”

Note that CAIR insists that Muslims must be the sole interpreters of what is in the Quran and Sharia Law. End of discussion.

We must call the Muslims on this. The Quran says in Surah 21:18, “We hurl truth at falsehood, until Truth shall triumph and Falsehood be no more.” Surah 14:52 insists that the Quran is “a clear message for humankind.”

Dear Muslim, please stop running away from your Quran.

Is there a Muslim here who is man enough or woman enough to defend the commands of Quran?

Of course, there is no shortage of offensive commands in the Quran. Pick your favorite outrage, or select from the list below, all of which are criminal acts in the U.S.:

It is our civic duty to declare these elements of Islam “unacceptable.”  Islamic Sharia Law holds that “silence is considered as permission.” (Reliance of the Traveler, Para. m3.12(1)).  Americans, by their blind respect for diversity and their silence in the face of acts that violate the law, are actually giving aid and comfort to criminal behavior. These Islamic practices and beliefs must be denounced before they become commonplace and socially acceptable in the U.S. (Recently, in Italy, the Union of Islamic Communities and Organizations (UCOII) claimed polygamy is a “civil right.”) Not only do these practices violate the constitutional rights of citizens, but they will erode the social cohesion and equal opportunity values that make America great.

Some might argue that not all Muslims engage in the offensive acts commanded by the Quran.  However, as we have seen in recent years, Muslims will demand as many of their Islamic prerogatives as the community will tolerate.  A decade ago, no Muslim would sue to wear a niqab while working at Abercrombie and Fitch.  A decade ago, no Muslim store clerk would refuse to handle certain items on a check-out counter. A decade ago, there were no exclusive Islamic prayer rooms in airports and universities. Even where Muslims are a minority, they impose their Sharia Laws on the community. Dearborn, MI, already has a de facto Islamic “no go” zone (See: http://truthuncensored.net/there-are-muslim-no-go-zones-in-the-usa/): 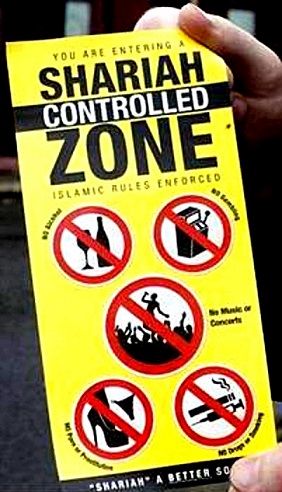 Americans – both Muslim and non-Muslim – need to talk about the evil commands in the Quran and in Sharia Law.  If Muslims “run away” from the issue, the divisions in our society will grow deeper and more difficult to bridge. The Brexit vote and the surprising traction Donald Trump is getting should be warnings to all Americans.