Book: 'With Love from Afghanistan' 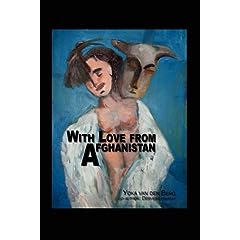 I, in The Netherlands, have spent anxious time for some two years fearing for the life of my Pashtun (Afghan) co-poet, Dervesh Himmat, whose life has been in danger under sharia as an Apostate of Islam, punishment for which is death. In secret writing against Islam, while living under censorship of Islamic government, I feared for my Afghan friend’s life as Muslims around him have no mercy for Apostates; for the safety of his immediate family, still unaware of his leaving Islam; and for any likelihood that our association may become known.

Rationally thinking, I cannot understand what can be served by making a apostate lie, as my co-author was for years forced to continue to act as if he was a Muslim—forced to pray five times a day, expected to celebrate Muslim religious festivals, go to the mosque by his immediate family, who assume he is a still Muslim, not a apostate.

An appalling inhumane situation with my co-author as victim of Islam is that Muslims around him, who are lied to by someone who fears their Islam, who is forced to lie. Muslims, who say Koran justifies sharia punishments, but cannot claim their absolutism, also say the Koran forbids lying. Besides, they claim that everyone shall be Judged on the Judgement Day, including apostates, Christians and infidels, and still they punish the apostates for not believing in what they are unable to believe in, as nobody can be forced to believe in God or not.

What sense does it make keeping up appearances?

What sense does it make in the eyes of Muslim's All-Knowing Allah?

What is moral or not is determined by religions. But it appears crystallized in Islam that murder is OK for apostasy, although it clashes their claim that murder is an immoral act.

Sure, I am not allowed to say this by Islam, though my co-author and I are victims of Islam, why I leave it to Islam to be proud of making victims of us against our basic Human Rights. We have bared our thoughts and angst about all these questions and issue through our poetry in this book.