Verse 2:30 says that Allah told the angels of His decision to create a human being to be His representative on 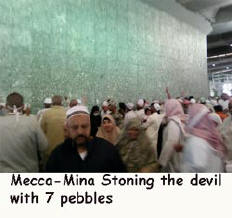 earth; the angels warned Allah of the wicked nature of human. Jalalyn explains this verse in this manner: Allah created Adam from the surface of the earth, taking a handful of all its colours and mixing it with different waters, then made him upright and breathed into him the Spirit and he thus became a living being with senses, after having been inanimate.

In verse 17:11 Allah claims that the human being is impatient; he prays for something that may not be good for him. Ibn Kathir explains that Adam wanted to get up before his soul reached his feet (this was Adam’s impatience). When his soul was breathed into him, it entered his body from his head downwards. When it reached his brain he sneezed, and said, ‘Al-Hamdu Lillah’. Ibn Abbas writes that this verse refers to al‑Nadr ibn al‑Harith; he is hasty to encounter chastisement. So Allah sent down this verse claiming that al‑Nadr need not be too impatient to receive Allah’s chastisement.

Ibn Sa’d (p.1.20) provides a better description of Allah’s creation of Islamic Adam. He narrates that Allah created Adam out of three kinds of soils: black, white, and fertile. Since Adam was created for earth it was necessary for him to eat the forbidden fruit.

How Allah created the Progeny of Adam

Here is a partial list of the creation of descendants of Adam. You will note many discrepancies and contradictory statements. But that is how Allah manages things.

Wow! What infantile gibberish that there are angels,jinns,etc that muslims in the 21st century must believe in ? All this gibberish will make even an infant smirk disdainfully as it is an insult to common sense and even the intelligence of an infact! No wonder , with such absolute stupidities ,the muslim get mad that they wouldn't tolerate anyone questioning or laughing at these ludicrous fairy tales without morals - Jinns eat bones,charcoal and shit! There are muslim jinns,christian jinns , Shia jinns , sunni jinns , hanbal jinns, and so on. HAHAHAHAHAHAHAHA! My stomach is aching laughing convulsively at the raw stupidities!

With such stupidities from Allah and his 'prophet' ,muslims are ever ready to defend them both with dire threats and violence is not surprising at all. How else can they defend the honour of their sole 'prophet' and the silly Allah from the riotous laughter that would follow these infantile gibberish? I really pity the muslims that they cannot come out of this incurable malady and integrate with modern society!

Ha Ha ha What A comedy

to >>NO Name "Ali Sina RUNS Away From Challenge to Debate" What a disgrace!! Probably you have run away from debate against Ali sina.

This is funny and at the same time tragic. Muslims have painted themselves into a corner, they cannot get out of it without looking stupid so anyone who points out the obvious gets threatened with death. Pitiful.

To this ISLAMIC monster,pedo, rapist MO_ HAM_ MAD true sucker,slave,dark minded fascist,dogmatic ,antidemocrat,antifreedom, JIHADIST ( is he Mr. ZAKIR NAIK? ) who is propagating his Hallucinations just like his BOSS MO /ALLA. .................. Hai --- ISLAMIC JIHADIST. You are certainly HALLUCINATIONG with your postings here - giving mis/disinformation by deception and lies & dishonesty. - just like the MO - Your profeteer, pedophile MO did . Even a 5 yr old will immediately tell that there is no comparison,no connection in whatso-ever way between the noble of the noblest SANATAN DHARMA & the paedo MO invented ( copied ) ISLAMISM !!!! Infact tehy are diametrically opposite. SANATAN DHARMA is not based on revelations,is not based on prophets,is not based on Only book of GOD - crap . SANATAN DHARMA is not dogmatic & it is not intolerant like ISLAMISM. SANATANA DHARMA do not claim that God is their GOD & the language in which it is written is chosen by GOD, that people for which it was meant were chosen by their GOD. Infact SANATAN DHARMA do not impose anything on anybody. BUt PEDO MO is intolerant,fascist,foisting his hallucinations on one & all ,killing all opponents,nonbelievers. SANATANA DHARMA do not tell you to belive in anything - it is you who has to read,think by using your intelligence,rational means that must do the right thing ,do good ,do good deeds,have good conduct,have kindness,compassion - then only you are considered as righteous person. in SANATAN DHARMA GOD is not confined to MALE entity & chauvinst . But Female- has equal if not preeminent role for all creatures existence in the universe..... One can write volumes to say that SANATAN DHARMA is in no way connected or fore told anything about pedo MO. DO not try to get some legitamacy or sanity by bringing in Hindu scriptures. It is your mental imbalance that makes you think that way.Moreover - you must also know that the values,principles,philosophy,ethos of SANATANA DHARMA are universal - eternal . All intellectuals,philosophers,thinkers of the world agree on this & know this - if they studied all theologies. There is nothing like SANATAN DHARMA on this planet. Read BHAGAVADGEETA. you will be enlightened ,ennobled,enriched,elevated & uplifted................... QQURRAN is on the opposite end - is like sewage ,inhuman,cruel,darkness,regressive,repulsive,poison to humanity.

Only Muhamad is the most hated man in the world,even by enlightened muslims as they cannot openly admit it for rear of death and torture that will be inflicted on them should they express their contempt for islam and Muhamad openly! Mohamad rapes his own 9 year old daughter Fatima ,his friend Abu Bakr's 6 year old daighter Ayesha, his own daghter in law Zainab the wife of his foster son Zayyed,the wives captured as war booty before their husbands and slitting the throats of the hussbands of the women before their very eyes and raping them. Most barbaric and ctuel! The likes of such a hallucinated psychopath the world has never seen before nor will be seen after!

On the subject of angels and Islam Mudammad it's taught had had received ay times the message of the Koran from an angle. Even IF this story is true it does not mean the Koran is of God. First,the Bible warns about "false apostles deceitful workers..." Further, "Satan himself is transformed into an angle of light." This is found in First Corinthians 11:13-15." Second, the apostle Paul warned in Galatians 1:6-9. of false gospels or "another gospel" and "though we or an angel from heaven,preach any other gospel unto you than which we have preached unto you, let him be accursed. As we said before, so I say now again,If any man preach any other gospel unto you that ye have received,let him be accursed." The gospel of the Bible is found in First Corinthians 15:3-8. which is in great contrast to the teachings of Islam. In Sum, even IF Mudammed did receive a message from an angle it only means that it is a false message, from an accursed angle,to an accursed and false apostle. - Quotes taken from the King James Version.

Ther's nothing called a pre- requisisite to beliive in jinns. The basic islamic conditions of faith are to beleive in GOd, his Prophets, Angels, Coran, ths day of Judgement, the things you are focusing on are LITTERATURE? EITHER GOOD OR BAD? BUT LITTERATURE jinns are creatures of god, tey are unlike us. we know a little about. I, for instance , dont like people talking too much on this issue. I find them strange. The path of Allah is straight, clear, light, happiness, and peaceful, even if our llfe is hell, truly. See what the Coran says about jinns, sourat Jinn "1. Say: It has been revealed to me that a company of Jinns listened (to the Qur'an). They said, 'We have really heard a wonderful Recital! 6. 'True, there were persons among mankind who took shelter with persons among the Jinns, but they increased them in folly. 11. 'There are among us some that are righteous, and some the contrary: we follow divergent paths. 12. 'But we think that we can by no means frustrate Allah throughout the earth, nor can we frustrate Him by flight. 13. 'And as for us, since we have listened to the Guidance, we have accepted it: and any who believes in his Lord has no fear, either of a short (account) or of any injustice 18. "And the places of worship are for Allah (alone): So invoke not any one along with Allah. 26. "He (alone) knows the Unseen, nor does He make any one acquainted with His Mysteries,-

All of you are wrong, you dont really know what are you talking about. Wrong things for Mohommad, that doesnt seem right. Let God has mercy on you because hell is what is waiting for you, remember that! These are not comments, these are assaults!

May Allah Bless you All for whatever things that you have written. For your religion is yours and my religion is mine... Ok not to believe but pls dont write despicable words...

its just too funny that everyone that has posted comments here are sleeping in the same direction. DAFT u are. Islam is a religion that will succeed with or without us. This is the word of Allah. Have a rethink as there are so much media war and false things abput islam being shown on tv and on the internet. The person who wrote this has his intentions and u guys posting are as foolish as he is.