Burning One Hijab: One Giant Burning for Womankind (Hopefully)

Well, it made my day. Some woman in Norway done went and celebrated International Woman’s Day by burning her hijab. It was about time. And she made a right pretty little speech:

“Let me today light a fire for freedom, for equality, for love and for peace.” 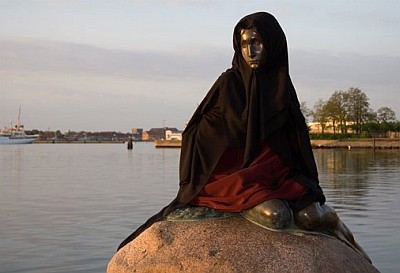 It wasn’t Patrick Henry and she didn’t talk about fighting on the beaches and in the fields but the speech had spunk. Then she set fire to that black devil and there was some cheering and hand clapping.

Reckon the only place Muslim men aren’t allowed to burn the flag of the country they are residing in—other than Muslim countries: in Crawdad, Arkansas, mah old hometown. There was one thing I would have done different if I was Sarah: I would have burned the damn thing in front of a mosque with Peewee Herman dressed as an Imam doing the Dance of the Seven Veils.

But bra burning can’t hold a candle to hijab-burning. Penelope Potter and her sistren were no more threatened than Maggie was by Jiggs. According to my calculations, and this is only a rough estimate, they will have to burn at least 500,000 hijabs to make a start. Why Susie Sarandon and Rose O’Donnell and NOW and Code Pink aren’t helping these poor women is beyond me.

I brought this hijab-burning business up at Joe’s Bar and Grille and Gun Club the other night. The consensus was it would never catch on given the nature of Islam and the spinelessness of the West.

Now if the Muslim women would start burning their bras instead of hijab, even such stick-in-the-muds as Sean Penn and George Clooney might support them, if they could be convinced that it wasn’t a plot hatched by Dick Cheney and the CIA to keep the war going.

Cowsnofsky suggested that the Muslimas could burn hijabs shaped like bras.

Then Doc Laffinstock went to his computer and dumped enough cold water on Cowsnofsky’s scheme to give us all a good soaking.

Doc commenced with Saudi Arabia where the Mutaween, the Commission for Promotion of Virtue and Prevention of Vice, sentenced a 75-year-old woman to 40 lashes for ‘hosting’ two men in her house. One feller was there, because he was delivering bread and the other was his escort. Seventy-five-years old!

And there was this woman who works as a maid in Lahore, Pakistan, Irshaad Begum, who considers herself lucky, because her husband who is now in ill health, no longer beats her up over petty issues but merely scolds her every now and then. He is lazy, does not work—apparently has never worked—and does not contribute to the family income; but she says, “I am happy because other maids are often bruised after severe beatings by their husbands.”

What that rascal needs is a good trashing. A man, who does not do his damnest to provide for his wife and kids, wouldn’t be allowed in mah church!

Two weeks ago, the president of Chechnya, Ramzan Kadyrov, came out of the mosque, where he had been a-praying to tell his countrymen that the bodies of seven young ladies found shot in the head and dumped along the road deserved to die. They were women of loose morals he said, and their male relatives had no other choice but to kill them! No other choice! The women were planning to go abroad and work as prostitutes said Kadyrov. I suppose he was told that in the mosque. Attila the Hun was more civilized than this Kadyrov bastard.

Then Laffinstock took us back to Norway. It seems Muslim girls in Norway are beaten if they don’t wear the hijab. It’s sad. That Sarah Amzeh Rasmussen is one brave woman—the equal of a dozen Rose O’Donnells. A woman who works with immigrants in Norway says, “(Muslim) Parents often beat their daughters into obedience and virtue and the hijab as a rule constitutes part of the control.”

Well, the boys didn’t want to hear any more—Doc Laffinstock had made his point. They was angry and wanted to do something.

But Doc wasn’t finished, he had to quote from some human rights activist in Grozny about the dead ladies in Chechnya. ”If women are killed according to tradition,” said the activist, “then it is done very secretly to prevent too many people from finding out that someone in the family behaved incorrectly.”

This was puzzling—sort of like cutting off your nose to spite your face. It wasn’t long before somebody brought up Sarah and Amina Said.

“What the God damn hell is this?” cried Ranch House.

Yes, what the damn hell was this?

We had to get a grip on ourselves. We had to calm down. This wasn’t as bad as the World Trade Center and it wasn’t as bad as the assassination of JFK and nowhere near Pearl Harbor but it was a moment of enlightenment! Somebody had been lying to us, a whole lot of somebodies—the President, the New York Times, NBC and CBS, the professors at Berkeley and Columbia, CAIR and MPAC, the Abrahimists, O’Reilly’s secular progressives, Robert Edgar and John Esposito, Sean Penn and Susie Sarandon, Dennis Kucinich and Nancy Pelosi, Letterman and now Obama is going to send his man to talk to Ahmadinejad’s man in Tehran. And after that it will be to Hamas and Hezbollah.

The boys at Joe’s Bar and Grille and Gun Club felt betrayed. It wasn’t a day of infamy—it had been thirty years of infamy!

Later that day the boys named the third barstool to the left of the waitress’ station maxflack in honor of maxflackreport.com. Max made a little speech, said it was quite an honor but he would forego having the traditional bottle of champagne busted over his head. He said if he had his druthers the hijab Ms Rasmussen burned that day in Norway would have belonged to Ingrid Mattson. Second choice was the headscarf Nancy Pelosi wore, when she made that disgusting pilgrimage to Bashar al-Assad in Syria.

In the wee hours of the morning the boys at Joe’s Bar and Grille and Gun Club formed the Mary Todd Lincoln Brigade and joined the fight for women’s rights.

But as Ranch House said, “Why are there so damn few of us? Doesn’t anybody know?”

Denis Schulz was prospective convert to Islam (read his testimony: How I Almost Became a Muslim?) before changing his mind after the 9/11. He actively writes on the threats of Islam and terrorism.

All ex-Muslim women should come out in open and burn burqas. That will set an example for other Muslimas.

How about burning the Mullahs alive wherever you find them. Verily their Allah will command the trees and rocks to tell the non-delusionist where the DELUSIONISTS are hiding.

I bet there are hunderds and thousands of women who would like to burn their hijabs. But they are afraid. They dare not because Islam is the religion of fear and violence.

burning the mullahs is the next step. I predict this will happen soon. Personally I do not like to contemplate the burning alive of a human being, but the mullahs have relinquished their humanity. Let's burn the bastards.

Already at the demo station, she was attacked by snowballs actually, by muslim MEN, and the muslim women cried. It was raining so it took some time till the hijab caught fire. And surprise surprise, she received death threats afterwards. We have had this huge police-hijab case now, our minister of justice approved of hijab in the police without even consulting police union or others. We have muslims in the police, and they also oppose the hijab. And it is the same debate, a politician warned about the effects of islamization, and pointed to Malmo. Of course the entire media and politicians start to cry about racism and islamophobia. This woman, Ms Rasmussen, is a very brave woman. If there is any award about standing up against sex-discrimination in islam, she should win it

Hello to all ! Great site. I am new here greetings to all from Poland.

u all bunch of wankers