Many people, (Muslims, as well as non‑Muslims, believe that once they have died they will remain at peace in their burial chamber until Allah raises them up on the resurrection day for the final judgment. They have little idea that Islamic activities on humans do not end with their death. In this episode we will learn how Allah will not let you go scot‑free, leave you in peace, even when your corpse has been laid inside a grave. If you are a non‑Muslim you really will have a horrible time once inside your grave.

Allah Will Grow Humans from their Graves

Allah says in verse 22:7 that the day of resurrection is a certainty. He will raise all those who are in graves. Allah repeats the same theme in many other verses, such as 36:78‑80. We may wonder as to how Allah will raise us from our graves when our flesh and bones have turned into soil.

In several verses of the Qur'an Allah provides answer to this perplexing question.

In verse 7:57 Allah says that He sends the winds to carry the heavily‑laden clouds to fall as rain in a dead land to produce agriculture. Ibn Kathir extends this act of Allah to include the regrowth of humans from fertile soil. He writes that Allah will send rain for forty days; corpses will be brought up to their graves just like seeds are sown; this will be the resurrection of the dead. Allah confirms this in verse 30:25, saying: because Heavens and the earth are in His disposal; when He calls out the dead, people will rise from beneath the soil (graves). Jalalyn interprets this verse that this will happen when Israfil blows the Horn.

Then Allah says in verse 36:51 that when the trumpet sounds, people will run from graves to Him. Ibn Abbas explains this verse stating that they emerge from their graves and proceed towards their Lord. According to Jalalyn this is the Horn at the second Blast for the Resurrection [to take place]; between the two Blasts is an interval of forty years.

To remove confusion from this Islamic cultivation of human bodies in soils of graves, Ibn Kathir maintains that the inhabitants of the graves are neither in this world nor in the world hereafter, and they will stay there (in graves) until the day of resurrection (23:100). When Allah wishes to resurrect the bodies, He will send rain from beneath the Throne, which will cover the whole earth, and the bodies will grow in their graves like seeds grow in the earth (35:9).

In verse 54:7 Allah says that the unbelievers eyes will be humbled; they will run from graves like locusts scattered (also see 101:4). Verse 82:1–5 say that Allah will cleave the sky asunder, scatter the stars, and turn the graves upside down. 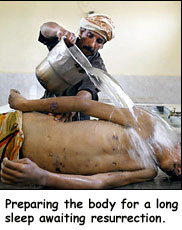 A hadis in Sunaan Tirmidhi (45) says that a grave is a horrible place. It is the first stage in the resurrection process.

Have you ever thought about the affairs of the person freshly buried in a grave? Most of us will have no clue as to what befalls on the dead person once the funeral is over, the person laid to rest under soil, and the mourners depart.

Here is what Allah does to a freshly‑dead, buried corpse:

Once people have buried a dead, and start departing, the dead man listens to the sounds of the shoes of his relatives after they have put him in his grave (Sahih Muslim, 40.6863). Sunaan Abu Dawud (2.20.3225) writes that a dead man, when placed in a grave, hears the stepping sound of his departing companions.

Further, in Sunaan Abu Dawud (3.40.4734) we read that when a man is placed in his grave and his friends leave him, he hears the beat of their sandals; then two angels come and speak to him. Sunaan Tirmidhi (50) writes that upon burial in a grave, a Muslim will rise up, see the setting sun and offer prayer.

Obviously, we should have no doubt about the fate of the unbeliever’s corpse, as he will not offer any Islamic prayer.

Sahih Muslim (40.6862) writes that after the burial in the grave, and after the mourners have left the burial site, two angels enter the grave and ask the dead person regarding Allah and Muhammad. If he were a non‑Muslim he would be shown his seat in hell fire. Once the angels are satisfied that the corpse is that of a Muslim, they expand the grave of the believer to seventy cubits, and he will be shown his place in paradise. Sahih Bukhari (2.23.450, 451) further explains, in connection with verse 14:27, that the dead man sits up in his grave and the angels talk to him about Allah and Muhammad.

The names of those two angels who interrogate the freshly‑buried corpse are Munkar and Nakir. In Sunaan Tirmidhi (44) we get a description of these two angels of graves. This hadis says that Munkar and Nakir, the two angels of grave, have black faces and blue eyes. They will question a Muslim in his grave. When satisfied with the answers regarding Muhammad and Islam, these angels will increase the volume of the Muslim’s grave to 4900 cubic feet, light the grave, and instruct the Muslim to have a peaceful sleep. For a hypocrite his gravesides will be squeezed so much so, that his bones are crushed.

Here are a few more ahadith to understand what Allah does to a corpse once it is inside a grave:

Many people (including many moderate Muslims) will find it impossible to believe that Allah will torment them in their graves. However, Allah is merciless when He deals with the unbelievers. Ghazali (p.1.117) writes that belief in the punishment of grave is compulsory. Malik’s Muwatta (16.6.18) says that even a child (infidel, of course) is liable to be tormented in his/her grave.

Curiously, Muhammad borrowed this concept of Allah’s torment in grave from the Jews of Medina. In verse 40:45 Allah says that He protected the believer (Moses’ disciple) who was in the midst of Pharaoh’s people, but destroyed Pharaoh. On the exegesis of this verse ibn Kathir writes that in the beginning Muhammad denied there would be the punishment in the grave. Later, when he heard from a Jewish woman when she told Aisha about the punishment in grave, Muhammad changed his mind. Muhammad now insisted that the unbelievers, including the Jews, are tormented in their graves (Sahih Bukhari, 2.23.457).

Let us first examine the Qur'an about the Islamic torment perpetrated on infidels in their graves.

Sahih Muslim (40.6861) writes that Muhammad heard the sound of torture of the Jews in their graves.

Allah says in verse 6:31 that on the resurrection day, the unbelievers will regret when they have to carry their loads on their backs. Ibn Kathir explains this bizarre situation (load) in this manner:

Every unjust person, upon entering his grave, will meet a man with ugly face, dark skin and awful odour and wearing dirty clothes; on the resurrection day the unjust person will carry this ugly companion on his back to enter hell.

Previously, we read that the two angels, Munkar and Nakir, will interrogate the inhabitants of graves. So, this ugly man, with dark skin and terrible body odour, must be another human (an unbeliever, perhaps) who will enter the grave to humiliate the non‑Muslim buried in his grave.

Allah repeats His threat in verse 40:11. In this verse Allah says that the disbelievers will suffer two deaths; they will beg Allah for a reprieve. According to ibn Abbas the first death is when Allah took away their souls [in the life of the world] and the second death refers after Munkar and Nakir had questioned them in their graves.

While the reason/s to punish the unbelievers in their graves in understandable, it is quite interesting to note that Allah even punishes those Muslims (in their graves), because of their family’s wailing over him (Sahih Muslim, 4.2015, 2018, 2025).

Sunaan ibn Majah (2.1593) writes that the angels torment a dead body for its relative’s wailing over it.

We may wonder about the modality of Allah’s torture on the inmates of graves: Here is a summary of how Allah’s angels will carry out the torment.

Just as the infidels will undergo excruciating torment in their graves, Allah has reserved much reward for Muhammad’s ardent followers.

We had already noted that the angels of graves (Munkar and Nakir) would expand the size of a Muslim’s grave, and light the grave once they are satisfied with the interrogation. There are more rewards for the Muslims in their graves, such as:

so only people in graves will be subjected to torture.......so kafirs etc who burn the body will get away free ahahahahahahahhhhhaaa

Mr. Abul Kasem, Can you tell us what happen to people after death, Muslims and Non Muslims? Please backup your sources.

DEAR NAMELESS GUY....THE TRUTH IS HUMAN BEING IS NATURAL BEING NOT CREATED BY ANY FAKE ALLAH/JEHOVA. SO WHEN THE BODY IS DEAD,IT IS RE-PROCESSED BY NATURE AND THE SOUL SO CALLED BIO PLASMIC ENERY IS ALSO RE-PROCESSED BY NATURE BCOZ IN NATURE EVERYTHING IS REPROCESSED CONTINOUSLY....THERE IS NO JANNAT OR HELL...ONLY ENDLESS RE-CYCLING AS IS EVIDENT FROM OBSERVATIONS OF NATURE.

REligion makes humans stupid making them believe all absurdities that at can at best be laughed away as the pipedreams of a lunatic,a gullible ass and nothing more!Religion breeds only ignorance,stupidity,superstitions,ghosts,ghouls,jinns,angels,devils,phantoms,ogres,etc which are all non-existant and can come only from the brain of an idiot or a conniving rascal conning the gullible to gain power and submissionover them! Damn religions and their inane ways! We don't need religion when we are living in an age of knowledge and information and rational thinking.

Excellent, so natural things are founded on their own. Maybe the car you drive or the office you sit on were also created on their own. Car is natural, metal and steal are all natural.

Abul Kasem has described about his own destination!

All religions have their own silly voodoos and "sacred" anecdotes. Like that young son of God who walked on water or the other guy who received DHL (Divine Holy Law) on two stone slabs, and the list goes on... I am still wondering where did Jesus get his Y chromosome from, unless his mother was a hermaphrodite!

cremation is the way to escape Islamic grave voodoos.

nice article. those who do not believe in the ghaib (unseen), will not understand, as Quran already mentions about them too. ignoring the reality doesn't change anything. one should truly reason before it is too late. may Allah forgive us

salaam alaykum, may Allah increase you in knowledge and the understanding of the deen.I only want to add that you forgot to mention the fact that another angel appears again who makes the writing of the deeds of the deceased and hangs it on his neck till yaomal qiyaamah.

does thursday night include maghrib time?