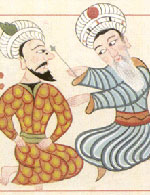 Ask any Islamist, and he will tell you that Islam is not only a religion, but it is also a complete code of life. Islamists strongly believe that Islam has the perfect solution for all the human problems—in this world, as well as in the next world. That is, life after death. Non‑Muslims might be amazed that there is no field of knowledge where Islam does not have a say. Thus, Islamic Medicine is very much alive, well, and thriving against all odds. Ditto for Islamic Surgery and Islamic Alternative Medicines. Please visit an Islamic bookstore to marvel at the number of books and manuals available extolling the unfailing qualities of Allah’s medicines.

This episode is a concise version of what we might expect from Islamic Medicines. 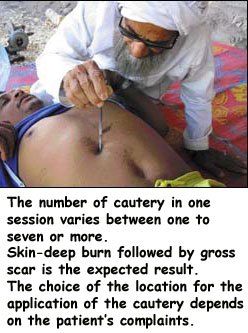 Cauterizing is a technique of searing or burning the skin with fire. During Muhammad's time, in the absence of qualified physicians or surgeons, this was a prevalent practice among the Bedouin Arabs. They used this technique to stop bleeding. When a wound became infected the desert surgeons would heat a piece of metal rod, and sear the affected part. Needless to say, this was a very crude, extremely painful, and often dangerous practice. Muhammad, however, proclaimed that cauterization is a surgical method authorized by Allah.

Cupping was another surgical technique used by the desert dwellers of medieval Arabia to heal certain illnesses. In this technique, using a sharp object such as a needle, an incision was made on certain part of the body, usually on the neck or on scalp. Then an experienced cupper would suck the incision to draw out the blood from the body. The Arabs believed that cupping would heal headache. Historical evidence suggests that Muhammad was a chronic sufferer from migraine headache. He had to resort to regular cupping to reduce his pain. Cupping needed experienced cuppers. So Muhammad engaged a number of cuppers to perform this surgery. Some cuppers even drank Muhammad’s blood (read the episode, ‘Islamic Black Magic Voodoo’).

Here are two ahadith to demonstrate that Muhammad engaged himself in Islamic cupping:

Sunaan Abu Dawud: Vol. ii, Number 1832
Ibn ‘Abbas Said: The Apostle of Allah (may peace be upon him) had himself cupped in his head when he was in the sacred state (wearing ihram) due to a disease from which he was suffering.

Here is a summary of a few more ahadith extolling the virtues of Islamic cupping: 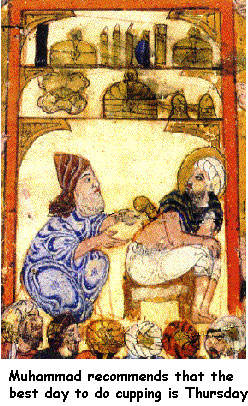 Thanks to modern surgical methods; today, those two techniques are considered unhygienic, unscientific, and lethal. As such, they are relegated to voodoo medicine category, and, in many countries these crude techniques are banned.

But in Islam, both cauterizing and cupping live on; they are Allah’s surgery.

Sahih Bukhari (7.71 584, 600, 605) mentions that healing is in three things: a gulp of honey, cupping and branding with fire (cauterizing). Another hadis in Sahih Bukhari (7.71.617) recommends the Muslims to get cauterized as a relief from pleurisy. Sahih Muslim (26.5467) writes that cupping is a remedy for pain. In ibn Majah (5.3478) Muhammad says that cupping softens the backbone and improves the eyesight.

Muhammad recommends that the best day to do cupping is Thursday, before eating any food. He also believed that cupping increases intelligence, improves memory, and lowers blood pressure (Sunaan Tirmidhi, 1197).

The Qur'an and Honey are Cures for All Illness 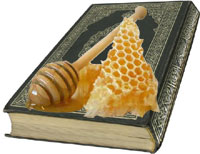 Curiously, despite a plethora of Islamic Medicines and Surgery, perhaps the only verse in the Qur’an, which mentions Islamic medicine, is 16:69. In this verse Allah says that He instructs the bees to eat from varieties of fruit; then they release coloured liquid from their stomachs (honey) and this liquid (honey) is healing. Ibn Kathir provides the reason why honey is a good medicine. According to him honey is hot, so it is a cure for all cold diseases, because a disease should be treated with its opposite.

In Sunaan ibn Majah (5.3452) we read that Muhammad said honey and the Qur’an are the remedies for all disease. The same medical virtues of the Qur'an and honey are repeated in Sunaan Tirmidhi (1196).

Here are a few more recommendations on the use of the Qur'an as an Islamic medicine. For more on this please read the episode ‘Islamic Black Magic Voodoo’.

Here is a compilation of Islamic herbal medicines.

And here is a list of Islamic Naturopath techniques to cure/avoid illnesses:

Four things that reduce eye-sight are: to look at unclean and impure objects, to see one being hanged, to look at female private parts and to sit keeping Kaba behind….(Ghazali, p.2.19)

Four acts that improve sexual power are: to eat the meat of sparrows, to eat big Atri fruit, to eat pistachio, and to eat water‑fruit…(Ghazali, p.2.20)

Diseases compensate sins. Fever of one day expiates the sins of a year…(Ghazali, p.4.239)

A few ansars (Islamic helpers) wanted to get blind because Muhammad said Allah has reserved paradise for a person whose two eyes are blind…(Ghazali, p.4.239)

If you love any material object it will cause you blindness and deafness…(Sunaan Abu Dawud, 41.5111) 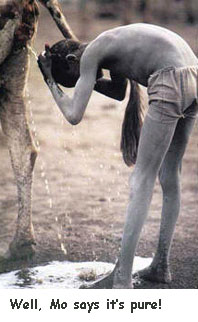 Allah has made the body‑waste of cattle as medicines for humans. In verses 36:71‑73 Allah says that he has created domestic cattle to be under the ownership of their owners, some to be used for transport and some to be eaten. To elaborate these verses ibn Kathir writes that cattle urine can be drunk as a medicine (also read part-3, Islamic Animals and Insects Voodoo).

To be sure that Allah did not make any mistakes in designating cattle urine/dung to be used as Islamic medicine, there are a number of ahadith where Muhammad has emphatically confirmed this divine medicine. Here is a partial list of ahadith to illustrate this guaranteed medicine of Allah:

Perhaps, the most intriguing Islamic medicine is the healing power of a housefly. Sahih Bukhari (4.54.337) writes that one of the wings of a fly has a disease; its other wing has the cure. So if a fly falls in a drink dip it in the drink, and gulp the water.

Here are two more ahadith to confirm that the hadis quoted is strong and authentic. 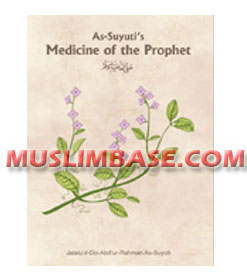 Just to ensure that Islamic saliva, Islamic ash, and Islamic dust are indeed Allah’s medicine to cure many diseases, here is a short list of citations on Muhammad's healing power of his saliva:

so only people in graves will be subjected to torture.......so kafirs etc who burn the body will get away free ahahahahahahahhhhhaaa

Mr. Abul Kasem, Can you tell us what happen to people after death, Muslims and Non Muslims? Please backup your sources.

DEAR NAMELESS GUY....THE TRUTH IS HUMAN BEING IS NATURAL BEING NOT CREATED BY ANY FAKE ALLAH/JEHOVA. SO WHEN THE BODY IS DEAD,IT IS RE-PROCESSED BY NATURE AND THE SOUL SO CALLED BIO PLASMIC ENERY IS ALSO RE-PROCESSED BY NATURE BCOZ IN NATURE EVERYTHING IS REPROCESSED CONTINOUSLY....THERE IS NO JANNAT OR HELL...ONLY ENDLESS RE-CYCLING AS IS EVIDENT FROM OBSERVATIONS OF NATURE.

REligion makes humans stupid making them believe all absurdities that at can at best be laughed away as the pipedreams of a lunatic,a gullible ass and nothing more!Religion breeds only ignorance,stupidity,superstitions,ghosts,ghouls,jinns,angels,devils,phantoms,ogres,etc which are all non-existant and can come only from the brain of an idiot or a conniving rascal conning the gullible to gain power and submissionover them! Damn religions and their inane ways! We don't need religion when we are living in an age of knowledge and information and rational thinking.

Excellent, so natural things are founded on their own. Maybe the car you drive or the office you sit on were also created on their own. Car is natural, metal and steal are all natural.

Abul Kasem has described about his own destination!

All religions have their own silly voodoos and "sacred" anecdotes. Like that young son of God who walked on water or the other guy who received DHL (Divine Holy Law) on two stone slabs, and the list goes on... I am still wondering where did Jesus get his Y chromosome from, unless his mother was a hermaphrodite!

cremation is the way to escape Islamic grave voodoos.

nice article. those who do not believe in the ghaib (unseen), will not understand, as Quran already mentions about them too. ignoring the reality doesn't change anything. one should truly reason before it is too late. may Allah forgive us

salaam alaykum, may Allah increase you in knowledge and the understanding of the deen.I only want to add that you forgot to mention the fact that another angel appears again who makes the writing of the deeds of the deceased and hangs it on his neck till yaomal qiyaamah.

does thursday night include maghrib time?