Islam is the most fun-loving religion as far as sexual activity is concerned. No wonder that it is the fastest growing religion among sex offenders in western prisons...

Muhammad was perfect example of a human being whose life should followed meticulous demands the Quran:

33.21: Mohammed is an excellent role model for you to follow.

3.31: If you love Allah then follow Muhammad and Allah will forgive your sins.

33.36: Rules and examples set by Allah and Muhammad is binding to all Muslims: there are no alternatives.

Therefore, following sunna and examples of the Prophet (PBUH) is mandatory for Muslims. Following them prepares the way, if not guarantees, paradise, whereas rejection of them leads to hell. Thus, it is utmost important to study what sexual practices were carried out by him in his life so that all Muslims can practice those sunnas and follow his footsteps. 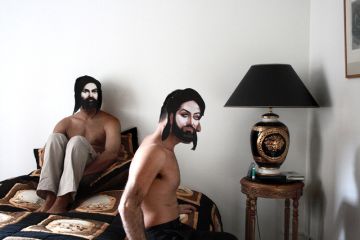 According to this hadith, a  (gay) man named Zahir, who used to say, “The prophet loves me,” said that one day Muhammad crept unawares behind him and put him in a bear-hug. Zahir, alarmed, yelled, “Get off me!” After turning his head and discovering that it was Muhammad, he stopped struggling and proceeded to “push his back into the prophet’s chest.”

Sunan Bayhaqi, which traces to Sunan Abu Dawud (one of the six canonical hadith collections), has Muhammad lifting up his shirt for a man, who proceeded to kiss his entire torso, “from his bellybutton to his armpits.”

Tafsir of al-Qurtubi—an authoritative exegesis in Islam. Aisha said that, one day, while Muhammad was lying naked in bed, Zaid came knocking; Muhammad, without getting dressed, opened the door and “hugged and kissed him”.

65.4: If you divorce your (child) wife before she reaches menstruation, the age her idda is three months.

A'ishah said: The Apostle of Allah peace be upon him married me when I was six and had sexual intercourse with me when I was nine and I was playing with dolls.

Sunan of Bin Said, which records Muhammad saying: “I hugged so-and-so when she was a child and found that I greatly desired her.”

Musnad of Ahmad bin Hanbal, which records Muhammad seeing a 2-3 year old girl in her mother’s arms. Muhammad was so “impressed” by her that he said, “By Allah, if this girl reaches marrying age and I am still alive, I will surely marry her.”

Even babies are halal

A Muslim man can have sexual pleasure with a little girl as young as a baby. But he should not penetrate her vaginally, however he can sodomize her.

Consent of a wife is not the requirement in Islam.

"When a man calls his wife, she must come, although she be at an oven."

The Prophet said, "If a man wants sex from his wife and she refuse it, then the angels send their curses on er till morning."

The Prophet said, "If a woman refuses to have sex with her husband, then the angels send their curses on her till she submits to him."

A hadith relayed by Abu Hurreira (deemed an extremely reliable narrator), where Muhammad sucked on the tongues of his cousin (and future caliph) Ali’s two boys, Hassan and Hussein (Boutros).

Musnad of Ibn Hanbal: "Muhammad would not sleep until he sucked the tongue of his daughter Fatima and nuzzled his face in her bosom."

Ref: www.islamic-fatwa.net Question 1809 [After the permanent committee for the scientific research and fatwahs reference number 1809 issued on 3/5/1453 and 7/5/1421 (Islamic calendar)]

Prophet had nine wives when he died. Quran allows changing of wives at will. The only condition to change your wife is to let her keep what you gifted her (aya 4.20).

34 books, including the Tafsir of al-Qurtubi and Sahih Muslim, record that Muhammad used to fondle, kiss and have sex while fasting (Boutros).

Narrated Maimuna: Whenever Allah's Apostle wanted any of his wives during the periods (menses), he used to ask her to wear an Izar.

Al Suyuti wrote Aisha relayed that Muhammad said to her “Come here,” to which she replied, “But I am menstruating, O prophet of God.” So he said, “Expose your thighs”; she did so and “he proceeded to lay his cheek and chest on her thighs.”

Ahkam al-Koran (v.3, p.444) A woman declared that she used to bring water from a well that had, not just menstruation blood, but dead dogs, and all manner of filth, and give Muhammad to drink.

Narrated AbuSa'id al-Khudri:
I heard that the people asked the Prophet of Allah: Water is brought for you from the well of Buda'ah. It is a well in which dead dogs, menstrual clothes, and excrement of people are thrown. The Messenger of Allah replied: Verily water is pure and is not defiled by anything.

Sahih Bukhari hadith (v.6, p.2744) relayed by Aisha where she said that, while menstruating, the prophet used to lay his head on her (naked) thighs and recite the Koran.

Narrated 'Aisha:
The Prophet used to lean on my thighs and recite Quran while I was in menses.

Allah has allowed a Muslim man to derive pleasure from a woman in any way or form he wants.

Narrated 'Uqba:
The Prophet said: "you are given the right to enjoy women's private parts.”

Narrated Hisham's father:
Khaula bint Hakim (who was prophet’s aunt according to Musnad Ahmed) was one of those ladies who presented themselves to the Prophet. 'Aisha said, "Doesn't a lady feel ashamed for presenting herself to a man?"

“A woman presented herself to the Prophet.”

“Prophet was given the sexual strength of thirty men”.

Apostle could make love continuously to all his eleven wives in one night.

From his own slave girls Prophet gave his son-in-law, Ali a slave girl, Raytah bt Hilal to enjoy her at his will. He also presented Uthman b. Affan, his son-in-law, another slave girl Zainab b. Hayan, and bestowed another girl (name unknown) to his father in-law Omar Ibn Khattab. Omar gave that girl to his son Abdullah. Most of Prophet's other elite companions received slave girls as gifts.

The best “perk” of Islam is to kill an infidel and enjoy his wife and daughters.

Ibn Hisham, p. 766:“Safiyah was captured in the Khaibar raid and was claimed by the apostle as his share of booty.. She was then seventeen. She was groomed and made-up for the Prophet by Umm Sulaim, the mother of Anas ibn Malik. They spent the night there”.

After 800-900 male adults of Bani Quraiza were beheaded in batches, and thrown in trenches dug in Madina, the apostle divided their property, wives and children as booty... He took Rayhana d. Amr b. Khunafa for himself.

Narrated Anas:
The Prophet had their men killed, their offspring and woman taken as captives. Safiya was amongst the captives, She first came in the share of Dahya Alkali but later on she belonged to the Prophet.

Narrated Ibn Aun:
Prophet had suddenly attacked Bani Mustaliq without warning while they were heedless and their cattle were being watered at the places of water. Their men were killed and their women and children were taken as captives; the Prophet got Juwairiya on that day.

From his share of captive women, prophet gave his son-in-law, Ali a slave girl, Raytah bt Hilal to enjoy her at his will. He also presented Uthman b. Affan, his son-in-law, another slave girl Zainab b. Hayan, and bestowed another girl (name unknown) to his father in-law Omar Ibn Khattab. Omar gave that girl to his son Abdullah. Most of Prophet's other elite companions received slave girls as gifts.

Islam is the most fun-loving religion as far as sexual activity is concerned. No wonder that it is the fastest growing religion among sex offenders in western prisons.

A pedophile has converted to Islam and changed his name behind bars. Paul Falconer, 40, now insists bosses at Peterhead prison call him Mohammed.