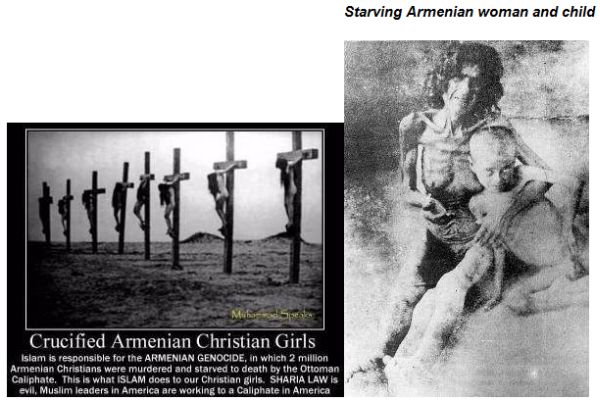 Muhammad in his lifetime had ordered 60 bloody attacks and raids upon the non-Muslim communities of Arabia, himself personally participated in 27 of them. In following the footsteps of Muhammad, sword-weiling Jihadis of Islam poured out of Saudi Arabia after his death, unleashing a 1400-year firestorm of massacre and genocide causing the death of estimated 270 million people, including 60 million Christians.

During the period between 1894 and 1923 AD, the Ottoman Empire conducted a policy of genocide of the Christian population living within its vast territory. In 1894, Ottoman Sultan Abdul Hamid, then regarded as the Caliph of Islam by Muslims worldwide, put forth an official governmental policy of genocide of the Christian Armenians living in the Empire. And within the first two years (1894-1896), the Sultan's forces carried out systematic massacres savagely killing 300,000 Armenians throughout the Ottoman provinces. The massacre resumed in the first decade of the 20th-century. In the year 1909, government troops killed over 20,000 Armenians in the towns of Adana alone.

The worst phase of the genocide of Armenian Christians in the Ottoman Empire started on the night of April 24, 1915, when Ottoman troops rounded up the Armenian intellectuals, professionals, editors, and religious leaders in Constantinople and almost all of them were executed. In the years that followed, three out of every four Armenians living in the Ottoman territory were systematically annihilated by the government that culminated in the murder of some 1.5 million souls. 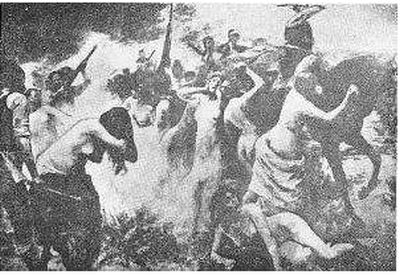 The Ottomans were very creative in their methods for all kinds of torture. They not only crucified the Christians, at times they used a hot poker – a red hot metal rod – that expert executioners carefully inserted through the anus of the victim avoiding puncturing the heart. As a result, the victim could live up to two days before dying since bleeding was minimized as the hot rod cauterized the wound.

Forced deportation of Armenian women, children and the elderly gave rise to some of the most shokcing scenes in recorded history. Like Prophet Muhammad offered conversion to Islam before murdering and exiling the Jewish tribes of Medina, some Armenian women and children were also offered the choice of conversion to Islam and subsequent slavery in Turkish homes. It it is estimated that only a thousand or so accepted the offer. The rest were driven from their homes to foreign lands at bayonet-point, and forced to run a vicious gauntlet of soldiers and marauding tribes people. "Women who lagged behind were bayoneted on the road, or pushed over precipices, or over bridges," writes the historian Arnold Toynbee.

The whole course of the journey became a perpetual struggle with the Muslim inhabitants. Detachments of gendarmes would go ahead, notifying the Kurdish tribes that their victims were approaching, and Turkish peasants were also informed that their long-waited opportunity had arrived. The Government even opened the prisons and set free Muslim convicts on the understanding that they should behave like good Muslims to the approaching Armenians. Thus every caravan had a continuous battle for existence with several classes of enemies – their accompanying gendarmes, the Turkish peasants and villagers, the Kurdish tribes and bands of brigands. Here the Turkish thugs would fall upon the women, leaving them sometimes dead from their experiences or sometimes ragingly insane.

After spending a night in a hideous encampment of this kind, the exiles, or such as had survived, would start again the next morning. The ferocity of the gendarmes apparently increased as the journey lengthened, for they seemed almost to resent the fact that part of their charges continued to live. Frequently any one who dropped on the road was bayoneted on the spot. The Armenians began to die by hundreds from hunger and thirst. Even when they came to rivers, the gendarmes, merely to torment them, would sometimes not let them drink. The hot sun of the desert burned their scantily clothed bodies, and their bare feet, treading the hot sand of the desert, became so sore that thousands fell and died or were killed where they lay. Thus, in a few days, what had been a procession of normal human beings became a stumbling horde of dust-covered skeletons, ravenously looking for scraps of food, eating any offal that came their way, crazed by the hideous sights that filled every hour of their existence, sick with all the diseases that accompany such hardships and privations, but still prodded on and on by the whips and clubs and bayonets of their executioners.

"The passage of rivers, and especially of the Euphrates, was always an occasion of wholesale murder," writes Toynbee. "In a loop of the river near Erzinghan ... the thousands of dead bodies created such a barrage that the Euphrates changed its course for about a hundred yards."

The end result of these torments was near-total extermination. From a typical convoy of 18,000 souls, just 150 women and children reached the destination. A few of the rest, the most attractive of the women, were still living as captives of the Kurds and Turks; all the rest were dead.

“The last survivors often staggered into Aleppo [Syria] naked," writes Toynbee; "every shred of their clothing had been torn from them on the way. Witnesses who saw their arrival remark that there was not one young or pretty face to be seen among them, and there was assuredly none surviving that was truly old ..."

Armenians were not the only Christians to be massacred. Over 3.5 million Christians of all races presihed in the Turkish persecutions of 1894 to 1923 AD:

Following are the skeletons of a few Armenian Christian victims of the Ottoman genocide. 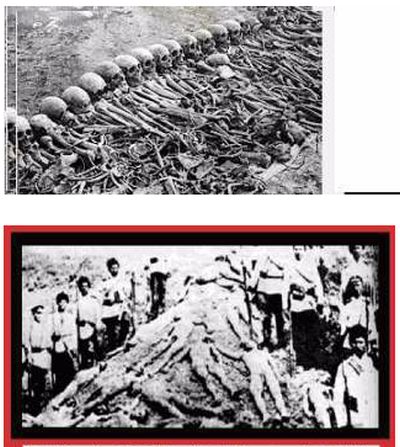 Adolf Hitler had once said: “Who After all, speaks today of the annihilation of the Armenians?”

Let us all pledge: We will never forget all those murdered in the name of Islam.

A memorial, titled “The Tears of Jihad”, should be built to commemorate the memories of the estimated 270 million kafirs murdered in Islam's name in the course of the 1400-year Islamic Holocaust that includes not only the Armenian and other Christians of the Ottoman Empire, but also Hindus, Buddhists, Sikhs, Blacks and Whites all over the world.