Muhammad and His Crimes against Humanity

What constitute crimes against humanity?

The International Criminal Court defines “Crimes against humanity” as any of the following acts committed as part of a widespread or systematic attack directed against any civilian population, with knowledge of the attack: murder; extermination; enslavement; deportation or forcible transfer of population; imprisonment; torture; rape, sexual slavery, enforced prostitution, forced pregnancy, enforced sterilization, or any other form of sexual violence of comparable gravity; persecution against an identifiable group on political, racial, national, ethnic, cultural, religious or gender grounds; enforced disappearance of persons; the crime of apartheid; other inhumane acts of a similar character intentionally causing great suffering or serious bodily or mental injury.

Islam’s prophet Muhammad actually committed or ordered each and every one of those crimes, and they are proudly reported in his most authoritative biography, “The Life of Muhammad” by Ibn Ishaq. The Quran asserts that Muhammad is “the good example” for Muslims to follow (Surah 33:21), but if he were alive today he would be arrested and put in prison in any country whose laws support the International Criminal Court. Here is the list of particulars which includes only one example of each of the crimes – although he was a serial offender in several of the crimes. Most of the illustrations below are from F. W. Burleigh’s new book, “It’s All About Muhammad – a Biography of the World’s Most Notorious Prophet,” and are used by permission. 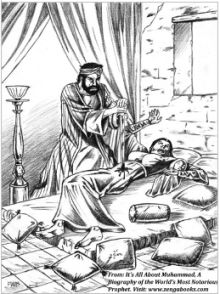 In 624, Asma bint Marwan wrote a poem criticizing Muhammad, saying to her people, “You obey a stranger who is none of yours... Do you expect good from him after the killing of your chiefs?” On hearing this, Muhammad asked, “Who will rid me of Marwan’s daughter?” Umayr went to her house that very night and ran a sword through her while she was in bed nursing her baby. She had five sons. Later when Muhammad’s followers were concerned about the consequences of this murder, he said, “Two goats won’t butt their heads about her.” Muhammad ordered or supported the murder of 43 different people. See: http://wikiislam.net/wiki/List_of_Killings_Ordered_or_Supported_by_Muhammad 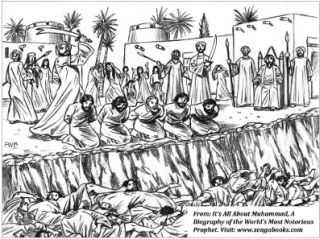 In 627 the Banu Qurayza was the last Jewish tribe remaining in Medina. On a false pretext, Muhammad besieged their fortress for 25 days until they surrendered. Then he approved and oversaw the beheading of 600 to 900 men in the market square of Medina. The women and children were pressed into slavery. The entire tribe was exterminated. 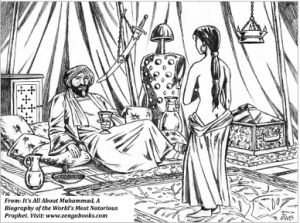 In 628, Muhammad and his followers attacked the rich Jewish town of Khaybar 100 miles north of Medina. Muhammad captured the chief Kinana’s wife Safiya and killed 90 male defenders, including her husband. That night he bedded with her as a slave, as she refused to convert to Islam and marry him. Muhammad had numerous slaves and concubines.

Deportation or Forcible Transfer of Population

Two Jewish tribes in Medina were ordered to leave the city – first the Banu Qaynuqa, and then the Banu al-Nadir in 626. The latter tribe was allowed to carry only what their animals could carry. Their remaining property was divided among the Muslims. Even their palm-trees were cut down.

From the very first successful raid at Nakhla in 624, captives were held for ransom. To ensure that the survivors would not just retaliate but actually pay high ransoms for the captives, Muhammad created this verse in the Quran: “It is not for a Prophet that he would have prisoners of war (and free them with ransom) until he had made great slaughter (among his enemies) in the land. (Surah 8:67 – Muhammad Khan) 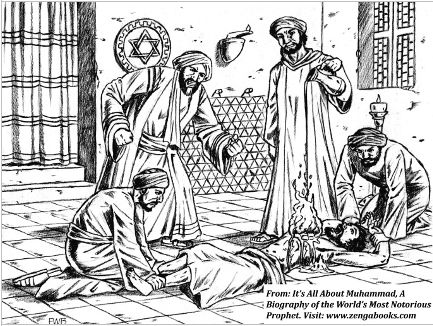 After the attack on the Jewish oasis of Khaybar in 628, Muhammad ordered a fire lit on the clan’s chief Kinana‘s chest to get him to divulge the location of hidden gold. When he was almost dead, Muhammed delivered him to Muhammad bin Maslama so he could cut off his head. 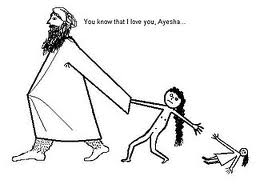 When Muhammad was 53, he consummated his marriage to Aisha, who was just 9 years old and who had been playing with her friends on a swing. She continued to play with her dolls in Muhammad’s residence.

Persecution on the basis of religion 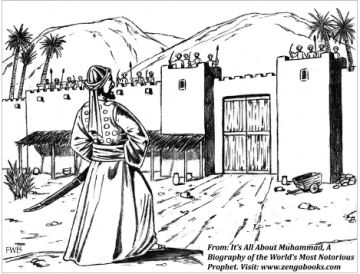 Muhammad claimed in his Quran that Jews had been converted into apes because of their sins (Surah 7:164). Later in 627, Muhammad besieged the Jewish conclave of Banu Qurayza for 25 days, and he taunted them, “You brothers of monkeys, has God disgraced you and brought His vengeance upon you?” The tribe ultimately surrendered and was exterminated because they were Jews.

The Quran lays down rules for how Muslims should treat their enemies: “Those that make war against Allah and His apostle and spread disorder in the land shall be put to death or crucified or have their hands and feet cut off on alternate sides, or be banished from the country. (Surah 5:33)

The crime of apartheid

On his deathbed, Muhammad’s final order to his followers was: “Expel the polytheists from the Arabian Peninsula.” To this day there are no Jewish temples or Christian churches in Saudi Arabia. Non-Muslims are not allowed to visit Mecca.

Acts intended to cause great bodily or mental injury

Muhammad’s adopted son, Zayd b. Haritha, was one of his most trusted warriors. On his raid of the Banu Fazara tribe, Zayd was wounded and some of the raiders were killed. When Zayd recovered, Muhammad sent him back with a larger force to take revenge. This time they captured the very old wife of Malik – Umm Qirfa. They killed her by tying her between two camels and ripping her in two.

Muslims cannot deny these horrific crimes against humanity, as they are recorded in their most authoritative historical records. They sometimes excuse them by saying that times were different then. That does not prevent the “true believers” among Muslims today, such as Al Qaeda and ISIS, from striving to emulate “the good example” of Muhammad. The time has come for Muslims to reflect on just who Muhammad was and what was his legacy to civilization.