All intellectuals, who have studied the Quran, are of the same opinion that Islam is evil and Quran is the cause (Here are some thinkers on Islam: http://www.Islam-watch.org/AyeshaAhmed/Great-Thinkers-on-Islam.htm)

Some political leaders in many countries think that banning the Quran and Islam is the only solution to rid their countries of the ever-intensifying Islamic problem. Some courageous ones like Geert Wilders have even publicly said so. There have been demands and petitions in many countries to do just that. The Calcutta Quran Petition in India is the most well known.

Well at last, one country has eventually got the ball rolling. It banned Islam and demolished all mosques. Wishful thinking? Nope, it’s a fact. Read on: 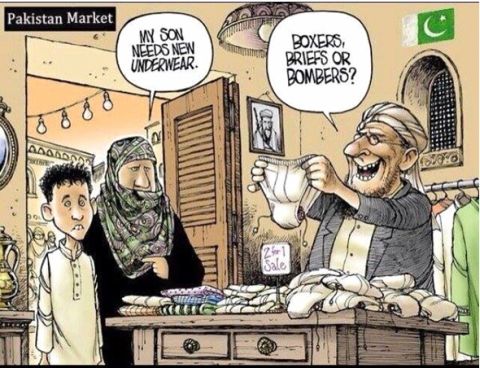 Without Islam’s Command for Killing Apostates, Islam Would Not Survive Today: Al-Qaradawi

In his book “The 100”, which lists history’s top-100 most influential people, author Michael Hart declared Prophet Muhammad to be No. 1, while Genghis Khan came 21st, Hitler 35th and Stalin 63rd. Why was Prophet Muhammad given the top position, although he only mass murdered thousands while the other three had killed in millions. Because Muhammad’s was way smarter and his cult and memory flourished, but the other three are forgotten along with their cult. Today, even after 1,400 years of his passing, his cultists continue to love and   adore him and passionately, would kill any one who insults Muhammad or draws his cartoon.

According to the Quran and sunna, there is great sawab and reward for living in the footsteps of our great prophet. The most repeated ayas in Quran are about obeying what Prophet ordered and following what Prophet did in life and how taking him as role model will land us in paradise. Since our prophet spent most of his final ten years of his life in   robbing, looting, raping  torturing and killing, those acts are the most  sacred and sawab yielding Islamic activities for us Muslims. That is the reason we have been doing those activities for the last 1400 years. However these acts have to be against infidels and bad Muslims (Mushriks), not good Muslims. [Warning: Extremely graphic pictures inside]

Everybody gets amazed as to why so many infidels in the West, specially the leftists and gays, love Islam. The Quran calls them lowest of creatures and worst beasts (8.55, 98.6) and orders Muslims to slay them unless they convert to Islam (9.5). In an ideal Muslim country, you can catch and keep them like a cow (Imam Hamza Misri). Gays are not even given an option; they are to be killed right away. There they are burnt alive, their temples are destroyed, their women are raped, but their love for Islam and Muslims does not diminish. They flock to pro-Palestine marches and shout pro-Muslim slogans louder than Muslims themselves.