Islam and Its Reformation by Muhammad

Her new book seems to create the illusion that there are actually two different Islams – the Mecca Islam and the Medina.

What Ayaan Hirsi Ali does not realize is that Muhammad was not only the Founder of Islam, he was also its Reformer, and Muhammad's Reformation of Islam came in the form of his abrogation of the earlier Mecca verses of the Quran by the later Medina verses. This article traces Muhammad's journey from Mecca to Medina, and the attendant transformation of Islam. 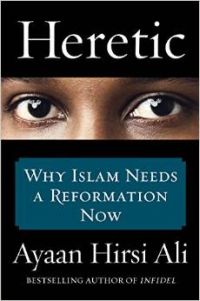 MUHAMMAD'S JOURNEY FROM OBLIVION TO CONQUEST

In the year 1517, Martin Luther initiated the Protestant Reformation when he attached his 95 Theses on the door of All Saints' Church in Wittenberg, Saxony. What Luther wanted was to rid the Catholic Church's corruption of the Christian faith by reinstating the original true teachings of Jesus.

In reality, ISIS, Boko Haram, Al Qaeda, Taliban, and violent Jihadis all over the world are all following Reformed Islam, the true and ultimate teachings of Prophet Muhammad and his imaginary Allah as narrated in the Quran and the Sunna.

Indeed, the greatest Reformation in the history of religion was initiated in 622 AD by Prophet Muhammad, some 895 years before Martin Luther's Reformation of Christianity. After arriving in Medina in 622 AD in the 13th year of his prophetic mission for founding Islam, Muhammad launched a 10-year Reformation campaign that led to rapid expansion of Islam from about a hundred followers to the 1.6 billion-strong Islamic ummah of today.

700 years before Muhammad, Jesus tried to overturn the barbaric and brutal aspects of the Old Testament with teachings such as:

At the time of Muhammad's brith in Mecca(ca. 570 AD), Christianity had spread throughout Turkey, the Middle East and North Africa with scattered Christian and Jewish towns even in today's Saudi Arabia. About 610 AD, Muhammad started his prophetic mission for founding Islam, claiming that he was recieving messages from God through Angel Gabriel.

At the beginning, when the number of his followers were too few, Muhammad undertook a pious course, exhorting people to submit to his new faith, Islam, claiming it the 'true path' of God.

At this stage, he followed the disciplines of prayer, fasting, and worship. He taught that Allah had revealed His teachings and guidance for mankind to himself through Gabriel, that his God was the same God that the Christians and Jews worshiped, and that Muhammad was the last prophet to be sent by God to establish one and only true religion, namely Islam, to be followed by all mankind.

The Mecca phase of Muhammad's religious teachings, the pristine, original teachings of Islam, was relatively inclined toward spirituality, tolerance, acceptance, and submission to the word of Allah. It was certainly not militant or violence inciting. Some 550 verses were revealed in Mecca. Following are a few notable examples:

For thirteen years, Muhammad labored to convince the predominantly Pagan Arabs of Mecca and nearby cities that he was a prophet sent by God with messages for all mankind. But he was unable to drow the people, particularly of Mecca, to his faith in considerable numbers. After 13 years, foreseeing certain failure of his religious mission in Mecca, the Holy Land of Idol-worship for the Arabs, Muhammad, with his 100 or so followers, migrated to Medina, where his mission was expanding and showing sign of success.

During this intial “weak phase” of his religious community, Muhammad showed respect for the monotheitic faiths of the Christians and Jews. His utterances about those two religions during this time was primarily respectful, and otherwise tolerant and benign. Muhammad was expecting, indeed desperately exhorting, the Jews and Christians to accept him as their prophet and savior, but they flatly rejected him as a FALSE PROPHET.

Muhammad at Medina – The Reformation of Islam Begins

Upon Muhammad's arrival in Medina, his nascent religion underwent a significant reformist change. His first biopgrapher Ibn Ishaq clearly intends to impress upon his (Muslim) readers that while in its early years Islam was a relatively tolerant creed that would "endure insult and forgive the ignorant", Allah soon required Muslims "to war against all and sundry for God and his Apostle."

After the total and complete failure of 13-year preaching in Mecca, mastering only about one hundred destitute followers, and himself bankrupt having squandered his rich wife Khadijah’s fortune, Muhammad and his Islam was facing the prospect of getting lost into historical oblivion. Then Muhammad hit on the brilliant idea of reforming Islam and the rest is history.

In Medina, Muhammad reformed Islam from a relatively benign form of monotheism into an plunderous and expansionary religio-political ideology that quickly helped him gained power and found the first Islamic State in Medina, which also set Islam on a path to become what it is today, a vast umma of 1.6 billion followers.

In Medina, we see a very different Muhammad and a very different concept of Islam and a very different Allah. Here God would guide and instigate Muhammad to flex his muscle and unfurl his sword on an intended mission to become a political leader, a warlord and the ruler of the Arab Peninsula. Muhammad, in compliance with Allah's commands in the new Quranic verses, used the sword to compel people to convert to Islam or submit to his overlordship.

Muhammad's new Reformed Islam in Medina broke away from the rather benign and tolerant Islam of Mecca. It unleashed a 1,400-year firestorm up to our time, murdering an estimated 270 million people, including 60 million Christians. It completely wiped out Paganism, Christianity and Judaism from the Arab Peninsula with over 30,000 churches burnt down and came very close to conquering Europe. This firestorm continues to rage in our time and threatens the very existence of the Western Civilization. All this carnage was and is being done in the name of and to the greater glory of God.

Following are a very small sample of the reformed Islamic teachings of Muhammad:

1) Fight the unbelievers till the only religion left will be the one for Allah:

2) You have no choice in religion:

[4:115] As for him who opposes the messenger, after the guidance has been pointed out to him, and follows other than the believers' way, we will direct him in the direction he has chosen, and commit him to Hell; what a miserable destiny!

Then should they turn back (meaning: apostized), seize them and kill them wherever you find them; and do not take from them any companion or supporter (Quran, Chapter 4: 89)

22.72 When Our Clear Signs are rehearsed to them, thou wilt notice a denial on the faces of the Unbelievers! they nearly attack with violence those who rehearse Our Signs to them. Say, "Shall I tell you of something (far) worse than these Signs? It is the Fire (of Hell)! Allah has promised it to the Unbelievers! and evil is that destination!"

33:57 Surely, those who oppose GOD and His messenger, GOD afflicts them with a curse in this life, and in the Hereafter; He has prepared for them a shameful retribution.

4) Gone was tolerance. In was coercion of kafirs:

"In order that Allah may separate the pure from the impure, put all the impure ones [i.e. non-Muslims] one on top of another in a heap and cast them into hell. They will have been the ones to have lost." (Sura 8.37)

Certainly! Allâh will admit those who believe (in the Oneness of Allâh Islâmic Monotheism) and do righteous good deeds, to Gardens under which rivers flow (Paradise), while those who disbelieve enjoy themselves and eat as cattle eat, and the Fire will be their abode. 47:12

5) Out was peace and love of kafirs. In was terrorization, torture, murder.

5:33 The only reward of those who make war upon Allah and His messenger and strive after corruption in the land will be that they will be killed or crucified, or have their hands and feet on alternate sides cut off, or will be expelled out of the land. Such will be their degradation in the world, and in the Hereafter theirs will be an awful doom;

"Allah revealed His will to the angels, saying: 'I shall be with you. Give courage to the believers. I shall cast terror into the hearts of the infidels. Strike off their heads, strike off the very tips of their fingers!' That was because they defied Allah and His apostle. He that defies Allah and his apostle shall be sternly punished by Allah." (Sura 8.12-13)

5) Kill the critics and do not make friends with unbelievers

9.061 Among them are men who molest the Prophet and say, "He is (all) ear." Say, "He listens to what is best for you: he believes in Allah, has faith in the Believers, and is a Mercy to those of you who believe." But those who molest the Messenger will have a grievous penalty. (In the link 'leaving Islam' you will find many events where Muhammad had numerous critics murdered)

5:51 "O believers, do not hold Jews and Christians as your friends. They are friends of one another; and anyone who makes them his friends is one of them."

9.023 O ye who believe! take not for protectors your fathers and your brothers if they love infidelity above Faith: if any of you do so, they do wrong.

In sum, Muhammad's 13 years of preaching in Mecca was a complete failure. Had he continued walking the same nonviolent path in Medina, Islam would have died a natural death in his life-time itself. But Muhammad's militant reform of his religion in Medina, which transformed Islam into a plundering Mafia Enterprise, offering prospective followers a share of the loot and captured women, as well as forcing the rejectors of Islam to embrace it on the pain of death, that Islam became a lasting and ever-expanding religious enterprise as it continues today.