Religion: The Humanized Recipe of Hate!

For thousands of years, the world has been in an almost constant state of religious tension, dispute and violence. During this time, humanity has been hit by a continual wave of religious fanaticism that enslaves the body, mind and soul of man to a heinous and oppressive ideology. This psychology, however unfortunate, is obviously innate to the human mind. 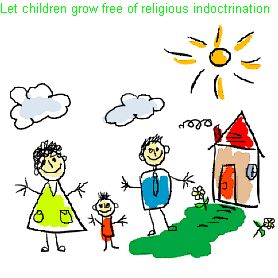 Also innate to the human mind, fortunately enough, is the desire to be free and liberated from all enslaving and degrading regimes and ideologies. The psychological and oppressive aspect of the human mind also possesses the mania to associate itself with ‘God’, the greatest power of the cosmos and the living world. Hence, this psychotic criminal element that desires to enslave and exploit humanity passes itself off as a ‘bread of religion…’

Let us challenge all those, having a religious bent, to show us that ‘where is the humanity within their religions.’ In the case of the fanaticism that frequently defines a religion, the problem is, if this fanaticism becomes less harsh, cruel, brutal, intolerant and violent, it won't be the same religion anymore ...or will it? And Islam has the biggest ego to reprimand human beings into believing everything is greener on its side of the valley.

All free, liberated and sovereign human beings need to demand fanatical religionists to demonstrate the humanity of their religion. Such a demonstration would mean allowing the following:

Just their mental abuse, beating children physically for not learning or accepting their religion is pure EVIL. Leave the children alone! They will develop naturally as healthy and happy human beings—and, if there's any true religion on the Planet Earth, that is it! Nothing more and nothing less!

For the children to know what life is all about, let them be just children.

And let the children show YOU the way out of the manmade HELLS created on Earth because of absurd religions. No decent god worth the salt would be interested in oppressive and brutal anti-human psychosis that passes itself off as ‘religion’ in our living world. To humanize the current violent, malevolent and woman-hating religious fanaticism, it would require utter changes in the thinking to point, where it no longer exists. With this sort of religious bias existing in societies, it is impossible to humanize the human mind, because it is so entirely inhumane and anti-human.

In the long run, that which is truly humane in any given religion, what constitutes common decency and morality, is already intrinsic within the human mind and does not need religion either to create or sustain it. If religion is to serve any purpose at all, it must emphasize and develop that common decency and morality, which provides the greatest chance for benevolence to thrive to its fullest potential of the ‘belief system’.