The non-Arab Muslims, ignorant of what truly lies within their sacred religious scriptures, follow Islamic rituals, including the Ramadan fast, with utmost devotion. On the other hand, Islam barely survives in the Arabic-speaking world, only – I repeat – only because of the Muslim rulers, whose survival totally depends on the terrorizing Islamic laws. If those nations become secular democracies with freedom of choice in religion, the majority of them will quickly leave Islam.

Ramadan, the supposedly very sacred month in Islam, is merely an occasion of fun, festivity and relaxation in Islam's holiest land Saudi Arabia. The whole month is undeclared holiday for the Arabs. Unlike the non-Arab Muslims, who fast and offer additional prayers during Ramadan, and maintain their normal daily work routine, the Arabs keep awake throughout the night, eating, drinking, playing and doing shopping until the early morning prayer. Then they sleep all day long even in their offices, overburdening their expat co-workers with their share of the work.

Moods of Arab Muslims both men and women during the month Ramadan: 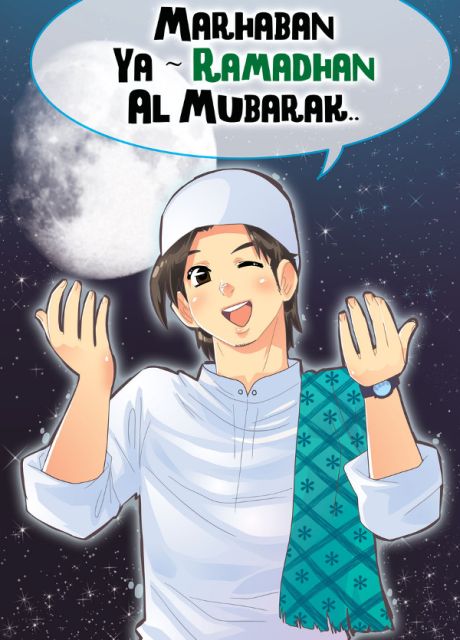 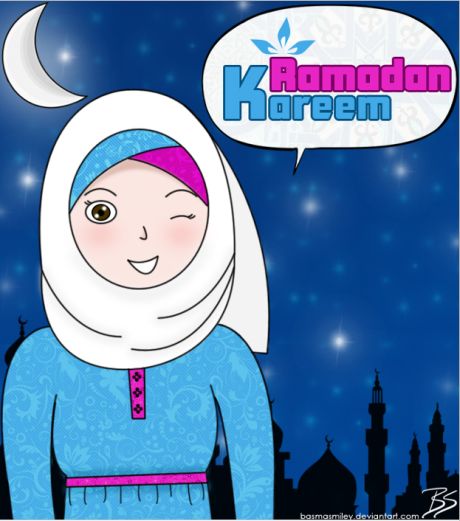 Every Muslim pretends to prove that he is the best Muslim, mainly due to social pressure on them. 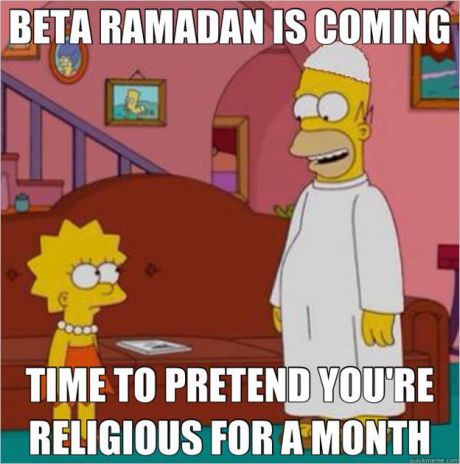 This is a common scene in every household, even at offices. The Arabs literally book places for sleeping in offices a day before the start of Ramadan. 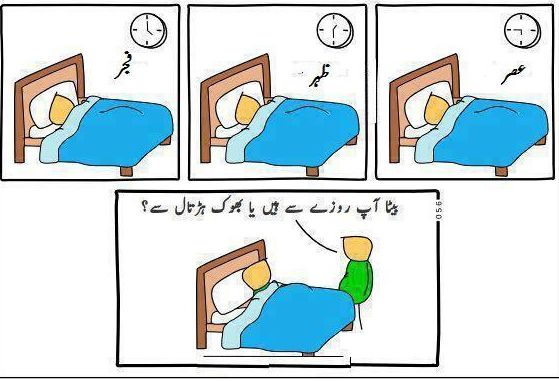 Ban on eating in public during Ramadan in Saudi Arab

The Prophet said, "…. the smell coming out from the mouth of a fasting person is better in the sight of Allah than the smell of musk…” (Sahih Al-Bukhari: 3:31:118) 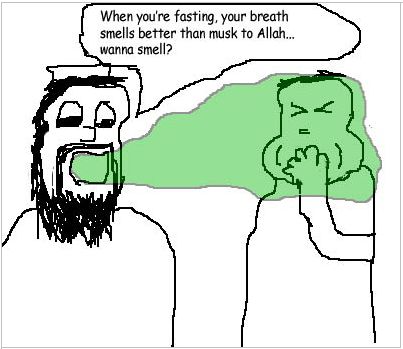 Muhammad said: Whenever anyone eats next to a fasting person, the angels perform dua (supplication) for the fasting person until the other finishes eating: 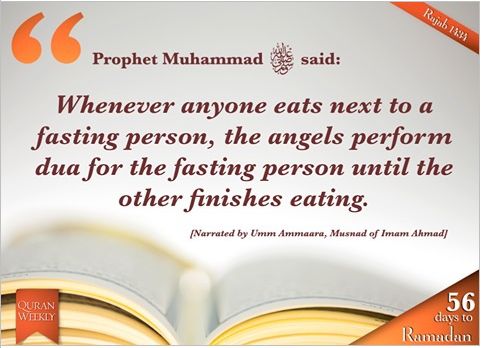 Thus, even though Prophet Muhammad did not ban eating in front of fasting Muslims, in Saudi Arabia non-Muslims are not permitted to eat in front of fasting Muslims. Non-Muslim foreigners working in Saudi Arabia have to find remote hideouts to eat their lunch in Ramadan because the fasting Arabs shout at them even at the smell of foods being eaten by them. There are billboards everywhere warning non-Muslims not to eat in public during the fasting hours, while the terrorizing religious police patrol the streets to catch and whip anyone found eating during the day time – which is against Prophet Muhammad, who did not prohibit it. In this way, the Arabs show their supremacy over the non-Muslim expats. 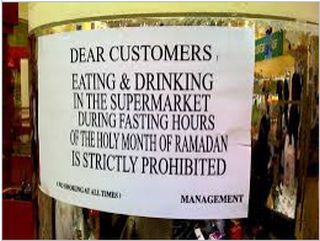 CONSEQUENCES OF THE FESTIVAL OF FOOD – RAMADAN

I recent decades, when obesity is becoming a serious health concern due to rising prosperity across the world, Muslims have been trying to portray fasting as a scientific and healthy practice foolishly thinking that their fasting helps trim their protuding bellies, thereby alleviating the malady of obesity. However, statistics proves otherwise: 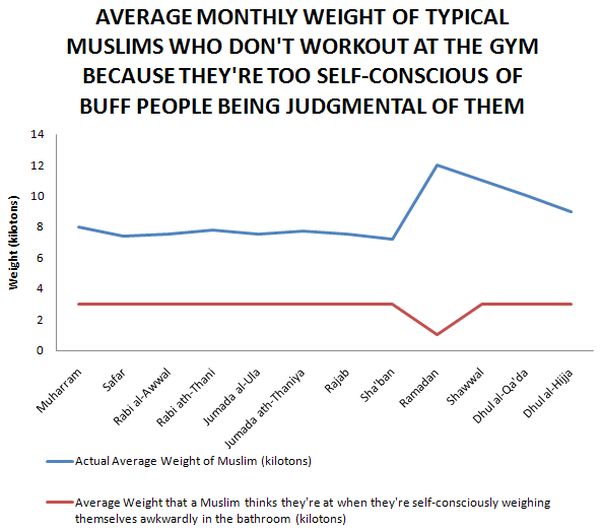 It is common practice among Muslims—both Arabs and the non-Arabs—to inquire each other, if they had completed their ‘Ramadan groceries' a few days before the ‘fasting’ month starts. These inquiries are important to them, because they spend thrice or more on foods in Ramadan in comparison to other months, and it is a staus and prestige issue among them: 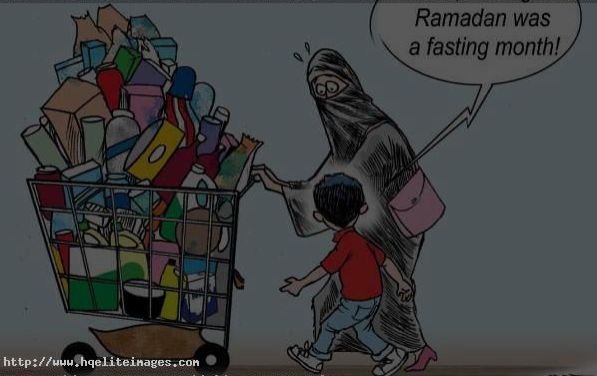 While working in Saudi Arabia, I found the supermarkets and the grocery shops being decorated one week ahead of the arrival of the month Ramadan, like Christmas decorations in the Christian world, and remain so till the end of the month. Shops, filled with huge stocks of meat and other eatables, are kept open from ‘dusk to dawn’. This ‘dusk to dawn’ shop opening may sound odd to readers, but because the Saudis sleep the whole day while fasting, this is the way things work there during Ramadan. Throughout the night, people from neighborhood gathers to play football, cards, and dominos, smoke ‘Habli Babli’, and eat and drink all night long with short breaks. Then they start sleeping at dawn. This kind of life-style with excessive eating and sleeping naturally make them gain weight and suffer from indigestion problems.

Provided, they shamelessly make cartoons of their own in their news Medias. Here are the few cartoons that explains the aftermath of the fasting month Ramadan: 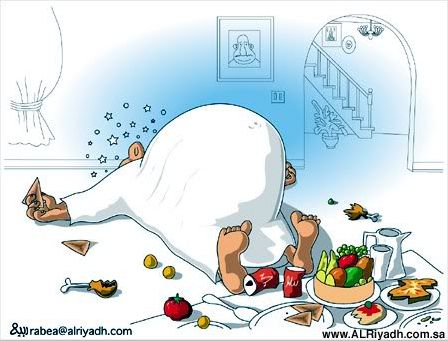 DEVIL CHAINED DURING RAMADAN BECAUSE MUSLIMS NEED TO BE PIOUS

Narrated Abu Huraira: Allah's Apostle said, "When the month of Ramadan starts, the gates of the heaven are opened and the gates of Hell are closed and the devils are chained." (Sahi Al-Bukhari 3:31:123) During Ramadan, if anyone say or do things which the Saudis deem wrong as per their mindset and ethics, they at once say, “Yaa qhi! Haada Ramadan”, which mean “O brother Muslim, this is Ramadan, you should not do this”. So clearly they are trying to be good only in Ramadan. It is a different thing that they do lot of fun and mischief during the midnight shopping and all those hypocricies. 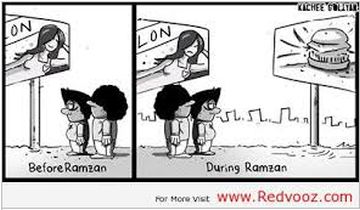 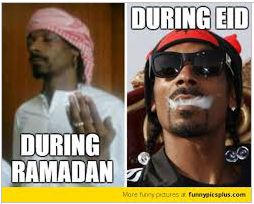 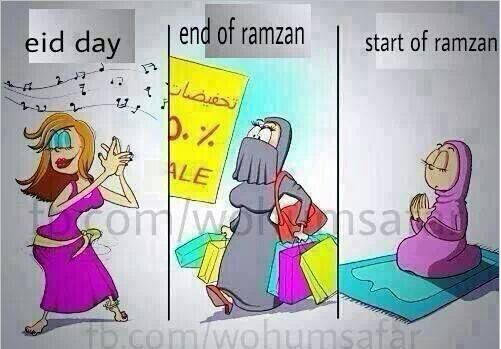 The Arab Muslims should not be blamed for what they pretended to do during Ramadan, and what they do after Ramadan as normal human beings, after all everybody has craving for freedom. I mentioned that the majority of the Arab followers of Islam will leave Islam if those countries become free secular democracies. Arab Muslims living under the tyranny of their authoritarian rulers are tired, terrorized and exhausted. These rulers take recourse of the barbaric and terrorizing Islamic laws to keep the masses under strict control. With the Arab populations now intimately connected with the outside world, thanks to the Internet, time may not be very far for a revolution for real freedom in the Arab world, especially in Saudi Arabia. In some way, they were ill-fated that their recent efforts at liberating revolutions fell prey to thuggish Islamists, who are a lot more worse than the rulers they tried to oust. We now hear that the Saudis are leaving Islam at the fastest rate, that the Iraqis are reviving their ancient fire-worship – relializing the true nature of Islam. I just hope that the next time they come out on the streets, they have a clear understanding of who or what their real enemy is, and have the right direction and strong leadership in place to successfully achieve their liberty and dignity as a people. They are the worst victims of Islam.