Those, who are aware of the newly-released movie, “Aisha and Muhammad”, by producer Imran Firasat should already know that Youtube stood in constant and firm vigilance with an iron-whip in hand to strike down any attempt to promote the movie on its website.

Youtube deactivated the first link of the movie within one-and-a-half hours of activation. The second link was deactivated faster that the first. That's how youtube dealt with Imran Firasat's movie.

What baflles us most is the fact that youtube fought hard a legal battle to keep the rather shoddily made video, “The Innocence of Muslims”, after one of it actresses, following death-threat from Muslims, initiated a legal proceeding against Youtube after it rejected her request to remove the video on the ground of defending freedom of expression. The protracted legal battle ran on for nearly a year, and in the final court verdict, youtube lost the case a few months ago, and regretfully deleted the video, terming it a bad day for freedom of expression.

Compared to “The Innocence of Muslims”, “Aisha and Muhammad” is much more serious movie based on a much better-researched and better-written story setting with the critical elements of the movie fortified by accompaying references from original and respectable Islamic sources. Moreover, the story in the movie, which is rather grossly and lewedly described in Islamic sources, is presented in a very measured and restrained manner in this movie.

Having advised Imran Firasat on the production of the movie whenever he sought guidance, and seen it multiple times, I am firmly certain that Muslims will never protest, let alone engage in violence, over a movie like this, since it is based on the normative Islamic narratives of the past 14 hundred years. And so far, although various Islamic organizations are talking about insults of the prophet in the movie, are not calling upon the willing followers of Islam to take to the street in protest against it.

Amidst youtube's resolute censorship of the movie, which has severely limited its reach to the viewers, now vimeo.com, which runs on a paid service platform, has also deleted the movie without any prior consultation with Imran Firasat, despite the fact that he paid for hosting the video on vimeo.com. Only after deleting the movie, they sent him an email to inform about the deletion. Here's the screenshot of the email Imran Firasat received: 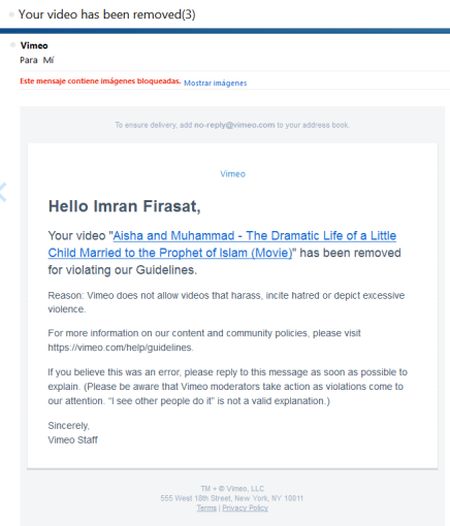 To be noted that LiveLeak and DailyMotion also deleted all the trailers of the movie that Imran Firasat had posted in those sites.

So, that's the way things seem to go even in the Western world today in the name of censorship about Islam. Vimeo.com (as well as youtube) is violating its own terms and conditions, and guideline, and is instead accusing Imran Firasat of doing the same, who has done absolutely none of that.

We all know that the mainstream western media have for a long time been a pliant servant of Islam, disregarding its responsibility of defending freedom of expression guaranteed in the UN Charter and in the Constitutions of Western nations. And now, even low-key media outlets like Youtube, Google, Facebook, LiveLeak, Daily Motion, and Vimeo etc., which had until now kept a flicker of hope for freedom of expression alive in the West, are also toeing the well-orchestrated Islamist line.

Therefore, freedom of expression, a most cherished human right established in the western world, is all set to die a quick death from the face of the earth, at least as far as its application to Islam is conerned.