#MuslimLivesMatter and the Missing HashTag Campaigns

The murder of 3 Muslim students in the college town of Chapel Hill in North Carolina is a tragedy.

And the murder has rightly ignited a worldwide hashtag campaign #MuslimLivesMatter. Every person has the right to Life, Liberty and the Pursuit of Happiness. So had those three Muslim victims.

The murderer is an an atheist. And a parking space dispute and noise from the Muslim students' quarter have been reported to have been the motivation of the murder. It is also claimed that he had hatred of Muslims. Whatever the real motivation, this is an incident of horrendous criminal homicide. No grievances justify taking lives. This heinous act stands against everything the American people stand for. 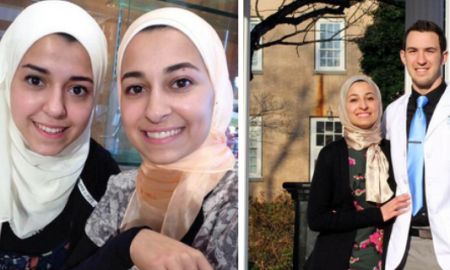 The recent Muslim terrorist attacks in Canada, Australia, France and Denmark are Islam In Action. Those Muslim attackers followed EXACTLY the Quranic verses and the Sunna of Muhammad that call for murdering kafirs, which guarantees the Muslim killers accession to Allah's virgins-filled Paradise. In Islam, Kafir Lives Do Not Matter. So, duly no hashtag campaign like #KafirLivesMatter was launched in the aftermath of those Muslim terrorist attacks. According to the dictates of the Quran and Sunna, non-Muslims who refuse to embrace Islam can be terrorized, murdered, tortured, enslaved and raped. It appears that Muslims as well as non-Muslims understand that cardinal fact of Islam. So, although thousands—both Muslims and non-Muslims—rightly expressed outrage at the murder of the 3 Muslims in Chapel Hill, no marches or protests were organized to condemn the Muslim carnage in Canada, Australia, France and Denmark. And there will be no protest-marches in condemnation of the murder and enslavement of the thousands of Christians and Yazīdīs in Syria and Iraq – not even in western countries although #AllHumanLivesMatter.

It is a historical fact that Islam is a diabolically evil ideology and in its name estimated 270 million human beings have been murdered over the past 1400 years, denying them the right to Life, Liberty and the Pursuit of Happiness.

Like Muslims, Christians have the same right to Life, Liberty and the Pursuit of Happiness. This right is denied by Quran 9:29 that calls for fighting, killing and subjugating Christians. And persecution, even murder, enslavement and rape of Christians is order of life in many parts of the Muslim world. As of latest, the Islamic State Jihadis in Libya have killed beheaded 21 Egyptians Christians. No hashtag campaign has been launched and never will be.

The Jews, likewise, have the full right to Life, Liberty and the Pursuit of Happiness. The Quran and Sunna is filled with anti-Semitism that denigrates and dehumanizes Jews and calls for their destruction to the last man.

All Apostates of Islam have the full right to live in democracy and freedom with the complete equality to Life, Liberty and The Pursuit of Happiness. This right is denied by verse 4:89 and Hadiths like
Bukhari, 4:52: 260, 5:59:632

Non-Muslim Women have the full right to Life, Liberty and The Pursuit of Happiness. But the Quran and Sunna grant Muslims full right to attack non-Muslim communities, and capture their women to keep as slaves and rape them. Prophet Muhammad captured the women of Banu Quraiza, Khaybar and other non-Muslim communities in this manner. The devout Boko Haram and the ISIS Islamic groups have, in recent months, captured hundreds of non-Muslim women in like manner.

Adulterers have the full right to Life, Liberty and The Pursuit of Happiness. Islam denies them this right by condemning to death by stoning. Every day adulterers are executed in countries like Pakistan, Afghanistan, Saudi Arabia, Iran, Sudan and other Islamic countries.

Gay people have the full right to Life, Liberty and The Pursuit of Happiness. But the Quran, Sunna and the Sharia law deprive gay people of their right to life. “If you find anyone doing as Lot's people did, kill the one who does it, and the one to whom it is done'” says a Sunna (Abu Dawud, 4447). And Gays are routinely executed in many Islamic countries, such as in Iran, Saudi Arabia, Afghanistan and in ISIS-ruled Iraq and Syria.

Prostitutes have the right to Life, Liberty and The Pursuit of Happiness. But under Islam, prostitutes have no such right. They are often brutally killed in many Islamic countries.

There are many more urgent hashtag campaigns long overdue, such as #MusiciansandSingersLivesMatter, #BlasphemersLivesMatter, as musicians and blasphemers are brutally murdered in many Muslim countries. Most of all, lives of all the victims of Islamic Jihadi violence–Muslim as well as non-Muslim—matter. Jihadi Islamists have killed tens of thousands of people, predominantly Muslims, in the Islamic world. But no hashtag campaign was launched to highlight the values of their lives, and never will be.